Share All sharing options for: Giants By The Numbers: 25 Is For ... 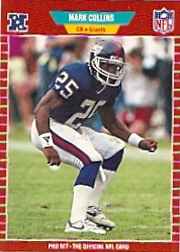 Remember that discussion we had about Perry Williams the other day? We can pretty much have the same discussion about Collins. A pretty good, though nowhere near great, player who did his job well enough to start for two Super Bowl winners and last 12 seasons in the NFL -- the first eight of those as a Giant.

Interestingly, Collins spent the seasons from 1986-93 manning the left corner for the Giants while -- usually -- he was paired with Williams over on the right.

Collins started nine games for the 1986 Super Bowl championship team. Then, remained a fixture at left corner until moving on to Kansas City in 1994. Collins was considered the better cover corner between he and Williams.

In a Giants.com article written several years ago, the retired Collins professed his love for the Giants organization.

"I'm known as a Giant. I still bleed Giant blue," Collins said. "Aside from my marriage and the birth of my kids, the best time I ever had in my life was when I was with the Giants. There were only two bad years, when Ray Handley was the coach. Other than that it was all good."

Have to agree on those Handley years. I doubt anyone would argue.

Other Notables who wore 25