Share All sharing options for: Giants By The Numbers: 24 Is For ... 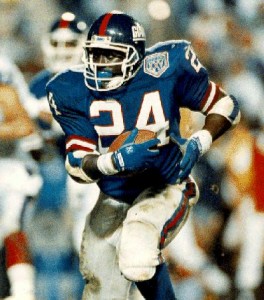 In my mind I can still see Anderson plowing into defenders, delivering his own punishment and fighting for every valuable inch of yardage in that game. At 33, which is more or less about 105 in running back years and no longer the svelte superstar he was when he began his career with the St. Louis Cardinals in 1979, Anderson lugged the football -- and Buffalo defenders 21 times for 102 yards as the Giants piled up first downs, held the ball for an incredible 40:33, and kept the ball away from the high-flying Buffalo offense.

Anderson had one 21-yard run in the game. The rest were simply blasts into the line aimed at netting a couple of yards and keeping the ball away from the Bills. Never has such simple offense proved so effective.

Following a superb career in St. Louis Anderson was 29 and considered done as a productive NFL running back when Bill Parcells and George Young traded for him in 1986. He was, seemingly, little more than insurance and was never expected to play a major role in the Giants' offense.

Joe Morris, mainstay of the Giants' running attack since 1985, was gone when 1989 rolled around and there were no young stallions ready to take his place. There was only the aging, plodding, bruising Anderson -- and he proved to be a perfect fit for the Giants for the next two seasons.

The speed and elusiveness of O.J.'s youth were gone. But, in their place was power, pride and a willingness to take the football, slam it straight into defensive lines again and again, almost never cough the ball up and churn out valuable first downs. In other words, he was the perfect back for the conservative Parcells -- and for the bruising, physical style of the Giants.

Anderson ended his career with 10,273 yards rushing, 24th on the all-time list.

You can read more about Anderson's exploits, and what he is up to these days, on his personal website.

Other notable No. 24s