Share All sharing options for: Giants By The Numbers: 21 is for ...

How can it not be?

Barber has been a disaster since retiring from the New York Giants. His television career has been in the toilet for a while now. If you follow the tabloid news you know his personal life is a shambles, and you can't ever respect anyone Tiki's age for dumping a pregnant wife for a 20-something hottie.

On top of all of that, I know there were plenty of mixed feelings about the guy I like to call 'Tiki Blabber' even before he played his final snap with the Giants. The things he said publicly about Tom Coughlin should never be aired about a coach since they divide and distract a team, and as a whole the Giants were better off once Tiki passed the running torch to Brandon Jacobs.

But, in judging his place with the Giants we have to put that aside. We will put aside all the extracurriculars for Lawrence Taylor when we get to 56. And, we already put them aside for Plaxico Burress when we discussed 17.

We have to judge purely what Barber did on the field as a player. And the reality is he played better, for longer, than any Giants running back ever has. 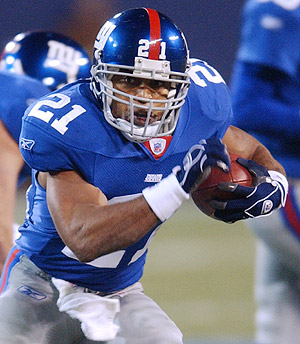 So, putting any personal feelings aside about the way Tiki has conducted himself the past few seasons his on-field greatness can't be questioned.

As far as other notables who have worn 21, we know it is currently occupied by Kenny Phillips. Special teams dynamo Reyna Thompson also wore 21 from 1989-92.