Share All sharing options for: Giants By The Numbers: 19 is for ... 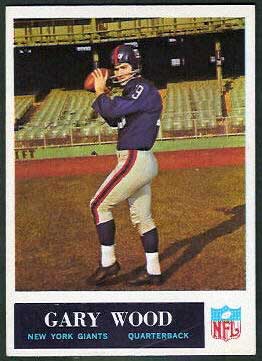 To be honest, this number should be for no one. It has never been worn by any truly distinguished Giant as far as I can find.

Which is pretty darn amazing considering that the Giants are one of the NFL's original franchises. I mean, we are not talking about the Houston Texans here.

I guess, based solely on longevity, the "honor" in this case has to go to quarterback Gary Wood.

Wood wore the number twice with the Giants. In stints with the team from 1964-66, then again from 1968-69. Maybe the number was cursed. Maybe Wood was terrible. Maybe the Giants just plain stunk and neither Wood, Unitas nor anyone else would have stood a chance with those teams. Regardless, in that time Wood started nine games. The Giants won just once with him calling signals.

A few other non-descript players have worn the number over the years. I'm not even going to bother to mention them. Unless you happen to be related to one of them I doubt you would remember, anyway.