At heart, I am still just a fan

Share All sharing options for: At heart, I am still just a fan

Big Blue View has been in existence for more than three years, since February of 2007 to be exact. In that time I have tried to bring you professional, high-quality work on a daily basis.

I hope that, for the most part, you believe I have done that. I know that along the way I have gotten to do some things I did not think possible when this site started. I have received training camp credentials, I get to co-host a radio show where we have player interviews, I get team press releases, I have gotten to attend the Pro Bowl and interview players after practice.

Along with your help in frequenting this site, I like to believe that presenting myself to people within the organization in a professional way has helped make all of this happen.

Every so often, though, something happens that reminds me of one simple truth. At heart, I am still a diehard Giants fan. Not a reporter or columnist or someone who has to be neutral and pretend that certain things are not a big deal. I am a fan. 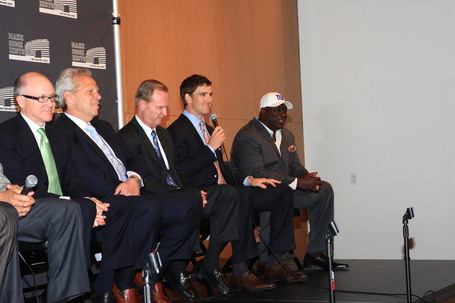 Wednesday was one of those days when I was reminded of that. In fact, the reality struck me like the concrete slabs falling sadly to the ground from what used to be Giants Stadium.

That photo that leads off this article? If you did not read the caption, that is me in all my wind-blown, drizzled on, bone-chilled glory, standing exactly on the 50-yard line of the New Meadowlands Stadium Wednesday.

What was I doing there? Partly, I was there to attend the press conference officially kicking off the New York/New Jersey 2014 Super Bowl bid, something I was invited to by the Giants media relations department.

My biggest reason for being there, however, was to tour the new stadium. Photographer Joseph Yetto accompanied me (and took the photo you see above). He also took dozens of incredible shots from the field, the luxury suites and every possible angle we could get a peek at Wednesday.

You will have to wait to see those, however. They were taken for the 2010 Giants Season Annual that I am editing and producing for Maple Street Press. Since I have to throw in a plug for that, you can pre-order the 128-page magazine -- which hits newsstands in August -- now.

Anyway, after the presser the various players, owners and officials attending wandered out to the field for interviews and photo opps. Seeing this, Joe and I followed the masses, scooting out the door and onto the field.

I am not sure about Joe, who wasn't shy -- going right up to Eli Manning and Ottis Anderson and asking for a photo -- which he got. I, however, didn't really 'scoot' onto the field. I more or less 'tip-toed' onto the Field Turf, thinking "I can't believe where I'm about to go."

After walking out onto the field, discussing shots with Joe and taking in the scene around me I looked down at where I was. Standing exactly on the 50-yard line. All I could think was "Holy S---," and I had to ask Joe to snap a pic of me standing there. Of course, I returned the favor for him.

Outwardly, no one there would have guessed how thrilled I felt to be walking on that field. Inwardly, though, I felt like a kid at Christmas. It was an amazing experience, one I know a lot of folks who do it all the time take for granted.

Point is, the whole day reminded me of why I am here at Big Blue View in the first place. I am a fan, I love this team. And I love writing and talking about it.