Share All sharing options for: Giants By The Numbers: 16 is for ... 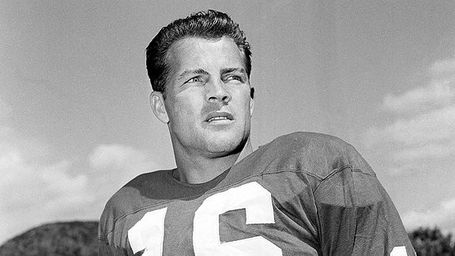 There are generations of football fans who don't know Frank GIfford, the football player. I am -- barely -- in that category.

Some know Gifford as the third wheel in the ABC Monday Night Football broadcast booth with hyperbolic Howard Cosell and the loose-tongued Don Meredith. Others might only know of Gifford as the philandering husband of talk show TV star Kathie Lee Gifford.

Gifford was a wonderful player, a two-way star when there were few of those left, and was inducted into the Pro Football Hall of Fame in 1977. Giants' fans not old enough to have watched him should at least know the resume.

Gifford was a Giant from 1952-64, was named to the Pro Bowl eight times and helped the Giants reach five championship games. Amazingly, Gifford's Pro Bowl appearances came at three positions -- defensive back, running back and flanker. He was NFL Player of the Year in 1956, when the Giants were world champions.

Gifford is remembered for two historic plays. First, coming up inches short of a first down on a critical play in the 1958 'Greatest Game Ever Played' against the Baltimore Colts. Second, suffering a tremendous hit by Philadelphia's Chuck Bednarik that caused him to leave the game for a year-and-a-half.

Here is the Wikepedia entry about that famous hit.

He lost 18 months in the prime of his career when he was the victim of a hard tackle. During a 1960 game against the Philadelphia Eagles, he was cleanly blindsided by Chuck Bednarik on a passing play, suffering a severe head injury that led him to retire from football. However, Gifford returned to the Giants in 1962, changing positions from running back to wide receiver (then known as flanker). Despite his long layoff and having to learn a new position, he became a star once again.