[Remember to check the '2010 NFL Draft' section for all stories relating to the draft.]

For the next few weeks our New York Giants -- and every other NFL team -- will be bringing in players for private workouts. These will run the gamut from guys who could be early picks to those who will be looking for training camp invites as undrafted free agents.

One of those players the Giants have invited to work out for them is Sean Lissemore, a 6-foot-3, 297-pound defensive tackle from William & Mary.

Since we are all about education here at Big Blue View let's make Lissemore the subject of today's Daily NFL Draft Prospect Profile and see what we can learn about him.

Lissemore sounds like an intriguing player with some ability who is drawing the attention of NFL scouts and making himself a late-round option for teams looking for defensive line depth. 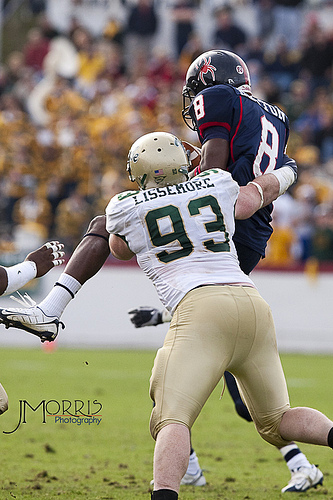 Richmond vs. William & Mary (via AUJM)

Thick, raw-boned street brawler who is naturally strong and a bit nasty. Does not look all that athletic but can move. Plays better than his athletic numbers and has some room to grow. Penetrates unless double-teamed, and is a good bull rusher. Stalemates OGs his size. Good motor. Pile maker.

Not all that big for an interior D-line candidate. ... Has a little upside but will never be more than a journeyman. ... Work ethic and speed gives him a chance.

Impressed scouts at their recent Pro Day. The 6-3, 297-pounder was twice timed in the low 4.8s in the 40-yard dash, 4.27 in the short shuttle and a 7.57 in the 3-cone drill. He also showed good explosiveness with a 30-inch vertical jump, 9-3 broad jump and lifting the bar 26 times. Lissemore is hardly a workout warrior. He earned first team all-conference honors with 66 tackles, 14 tackles for loss, 6.5 sacks and two interceptions as a senior. He also stood out at the Texas vs. Nation practices. Lissemore has already gained the interest of several clubs

Why Lissemore fits with the Giants

Because there are questions about all of the Giants defensive tackles, and you have to like some of the things you hear about this guy. Sometimes useful players come out of nowhere. Could this guy be one of those? Maybe.

Why the Giants should pass

Well, if the Giants were to draft Brian Price or another defensive tackle early they really wouldn't have a use for Lissemore -- except as training camp fodder.