Share All sharing options for: Giants By The Numbers: 7 is for ... 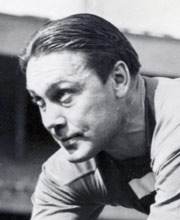 Perhaps we should rely on our own George Cronin, these days known as 'blue gonz' around these parts, for some historical perspective on this Hall of Famer. A guy still often called the best center to ever play, and a player for whom the Giants retired the No. 7.

Here is Cronin, writing for us in a series of historical posts he did a couple of years back.

Hein played two ways for fifteen years and never missed a game. Because he could do what other centers couldn't--flawlessly snap the ball to any one of three backs, the Giants were able to use a formation unique in the league. All NFL for eight years, he was MVP in '38, the only offensive lineman to win that award. I saw him play five or six times and remember him being able to snap the ball and get out in front of a runner on a sweep, pancaking defenders as often as not. As an LB in the 5-2 defense all teams played until Bill George of the Bears became the first MLB in '54, his hits separated defenders from their cleats, and he was a demon in pass coverage.