Share All sharing options for: Giants By The Numbers: 4 is for ... 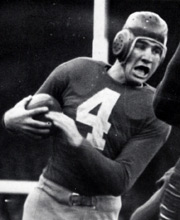 Here is Leeman's bio from Giants.com.

Leemans played for the Giants from 1936-43. He was a second-round draft choice in the first-ever NFL draft in 1936 out of George Washington. Leemans was personally scouted by Giants co-owner Wellington Mara. Mara sent a telegram setting up a meeting with Leemans to convince him to accept a career in the NFL with the Giants.

The No. 4 has been retired by the Giants. I can't find reference to another player who has worn the number for the Giants -- before or after Leemans.