New York Giants General Manager Jerry Reese would not say Thursday that the signing of veteran safety Deon Grant had anything to do with the health of Kenny Phillips. But, we know it had EVERYTHING to do with KP.

"We signed Deon Grant because, number one, he’s durable," Reese said. "He really hasn’t missed time. He’s a durable veteran who will bring depth and leadership to our safety position."

Grant, a 9-year veteran, said he was interested in signing with the Giants before the 2007 season.

"I wanted to be here when I went to Seattle, but they came into the picture late. This opportunity on the second go-round – it was destined. I’m happy about the coaching staff and my new teammates and I’m ready to help them win the Super Bowl again," Grant said. ""Hopefully, Kenny can come back one hundred percent and Rolle is going to do some big things. With those stud cornerbacks that we have, we can just line up and play ball." 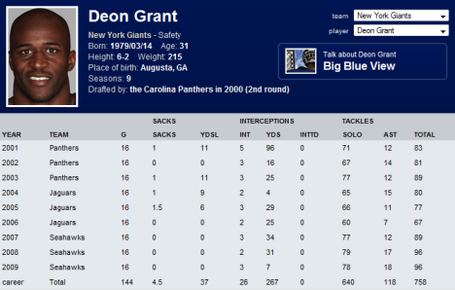 We found out Thursday that Jeff Feagles will return for a 23rd season as an NFL punter. We also found a possible reason for Feagles struggles last season, and why he considered retirement.

"I needed to do some things physically to figure out if I wanted to go and do this again," Feagles said. "So right after the season I took a little break and then jumped into working out on my own, and seeing if I could do some things to strengthen my legs. I thought I had lost a little bit of leg strength last year. I haven’t been able to train because of my knee the last couple of years. So I felt that I needed to get into the weight room and do some things and see if it was going to hold up. And I was going to make a decision after that.

"About three weeks ago I called Kevin (Abrams, the Giants’ assistant general manager) and told him that I was ready to come back and I think I can do it another year - and if you will have me back, great, let’s get something done."

The 44-year-old Feagles knows he will be competing with recently signed Australian punter Jy Bond.

"In my meeting with Tom it was very, very clear that I was going to compete for my job this year," Feagles said. "And my answer to that was, ‘That’s fine.’ I have been competing for a long time. That is what makes it all better anyway, competition. Plus, we will have another leg in camp which will be good for me, too. So I just have really said to myself, ‘Listen, get a contract done and just go compete.’ And I’m confident that I will be on the roster."