Recapping a Giant Weekend in Houston

Share All sharing options for: Recapping a Giant Weekend in Houston

I wasn't quite sure what to expect in Houston, from Texans fans or the Giants themselves, and I'm happy to say that by the end of the weekend I was pleasantly surprised by both. It's never easy going into enemy territory, but thanks to the (mostly) hospitable Texans fans, and the power of Big Blue View, our trip there last weekend could not have been much better. 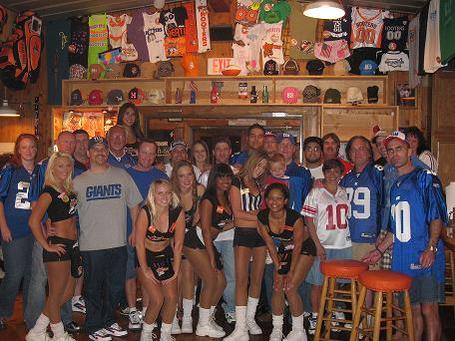 her Giant fans last week I had no idea just how big the party would get, and it made for a trip I'll never forget.

Not knowing what the tailgate situation would be, I first thought of organizing something for Saturday night, a sort of "pregame" party where we could all get together and knock back a few, and talk about the big game. After talking to a few Giants fans already living in Houston, the Hooters restaurant near Reliant Stadium seemed to be the perfect place for a meetup. Response was somewhat slow at first, but as the game grew closer, I was literally answering emails all day long from fans who would be in attendance, and wanted to be surrounded by friendly faces.

By the time it was all said and done, about thirty Giants fans had invaded the Hooters, and basically took the place over, much to the chagrin of the locals trying to watch the Texas A&M game. By my count there were close to thirty of us, yelling, screaming, chanting, and even commandeering the PA system. We had an incredible group of fans, some who had traveled from New York, some from Fort Worth, and one couple who drove all night from Jacksonville. It just goes to show you how devout a fanbase this is.

The servers and management at the restaurant not only took great care of us, but they were also pretty easy on the eyes, as you see from the group photo they took with us. I'm in the background there on the left, I was trying to get the girl next to me to sit on my shoulders, but she wouldn't go for it. She probably saved me from having to explain that to my wife anyway.

Sunday morning, our man "Hobie" offered to host a Texas-style tailgate party for Giants fans. You've heard the phrase "They do everything big in Texas"? This definitely applies to tailgating. Texans fans take their tailgating very seriously, but Hobie showed them that Giants fans know a thing or two about eating as well. Ribs, brisket, bratwurst, hot dogs, an unbelievable spread. We also found time in between bites to mix it up with the Texans marching band, who played right in front of our group, but refused to play "New York, New York" for us, despite the fact that about twenty Giants fans were singing it for them.

After eating and eating well, and enjoying a few Bud Lights, it was game time. We headed into the stadium to go up to our seats, and let me tell you, Reliant Stadium is a great place to watch a football game. Even with the roof closed (it was 88 and humid, ahhhh autumn in Houston), it just looks like a football stadium, great sight lines and a good atmosphere.

Now as you can imagine, despite the strong numbers at our meetup and tailgate party, we were severely outnumbered in the stands. For the most part, Texans fans were pretty cool, laughing and joking with us, good-natured ribbing before the game started. We were something of a novelty, these New York boys who came to watch their team become the Texans latest victim. 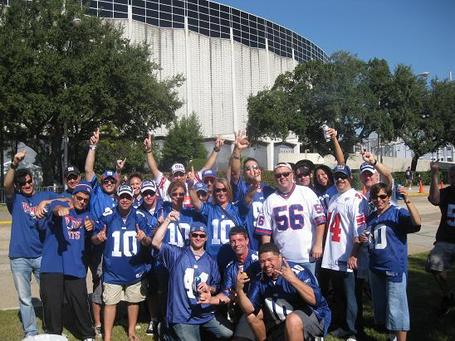 After it became 14-0 Giants, things changed a bit. To some of their fans, suddenly we weren't so "cute" anymore, and the good-natured banter from Texans fans turned ugly. I tried to explain to them that Eli Manning wasn't what they said he was, that he had a beautiful wife at home, and to my knowledge had never done any of the things they said he had. I also tried explaining to them that my parents WERE married, but at this point it was falling on deaf ears. But I did appreciate the trip down memory lane through Lawrence Taylor's rap sheet (I was wearing my 56 jersey, which is still undefeated in road games I attend), and I stand by my response of "Who doesn't?" when they said LT liked teenage girls.

Now, you may not know this because of my quiet reserved demeanor, but I have something of a big mouth. In the eleven years I have been with my wife, no trip to a Giants/Rangers/Mets game has ever taken place without a stern warning to "watch your mouth". Well, my teachers always said "Jimmy never listens", and some things never change. In truth; I was quiet for 14/15 of the game, but when our chief antagonist for the entire game decided he had seen enough of his Texans and got up to leave, you can bet I let him have it. He won't forget me anytime soon, I guarantee you that. As you will see in the video below, I pulled out my video camera at the two minute warning, when most of the Texans fans were now dressed as empty seats.

After the game, it was time to celebrate, and celebrate we did, staying in the parking lot partying with Giants fans literally until security kicked us out, having had enough of us. We want to thank all the Texans fans who gave us the one finger salute, telling us we were "Number 1" as we left the stadium, we appreciate it.

Words cannot express just how great a weekend this was. I would like to thank everyone who came out to meet us, because without you this weekend just would not have been the same, and once again, thanks to "Hobie" who hosted the best dang tailgate I've ever seen, I'll tell you whut. (I picked up the lingo while I was there)

Enjoy the video, and if you want to see more from the trip, you can find me on You Tube, by clicking that link, or my user name there is jrs1940. I also have a lot of pictures from the trip, those are on Facebook, you can friend me at http://www.facebook.com/BlueshirtBanter to see those.

I apologize for the shaky moments in the video, it was very hard to keep the Giants in the picture at maximum zoom. It's worth it though, because at one point it looks like Eli is looking right at me.