When you see the title "New York Giants: The Complete Illustrated History", you probably think this is just another 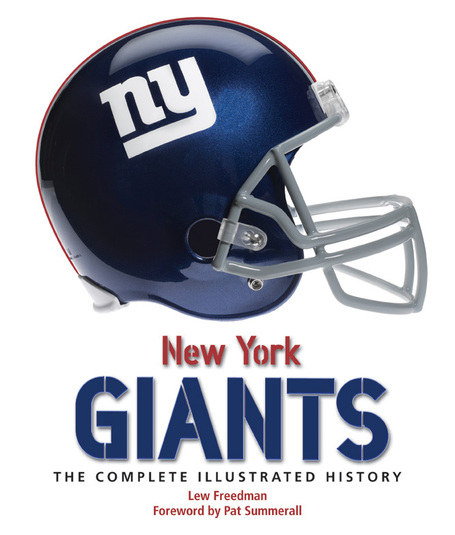 coffee table book with the same pictures of Wellington Mara and Y. A. Tittle that you've seen a hundred times.

Like me, you'd be dead wrong. Lew Freedman, a native New Yorker and Chicago sportswriter, has done an amazing job of not only filling almost 200 pages with pictures most Giants fans have never seen , but also telling stories that most fans have never heard.

Beginning with a foreword from former Giant and broadcasting legend Pat Summerall, this book takes you back to the beginning of football in New York, right up to the end of the 2008 season. Along the way, there are stories from many Giants players and coaches, and an in-depth look at each decade of Giants football, for better or worse.

"The Sneakers Game", "The Greatest Game Ever Played", "The Fumble", and "The Catch" are all in here, including interviews with the players who were there. For instance, when the play was sent in that led to "The Fumble", did you know that the players in the huddle begged Giants QB Joe Pisarcik to change the play, and he wouldn't for fear of incurring the wrath of the coaching staff?

Stories like that are just some of the untold gems found in this book. All Giants team and individual records are included here as well.

I've always considered myself a "student" of my Giants history, and while I don't think I could ever amass the mount of knowledge our man George has, I've always felt I could hold my own in a conversation about most players that have played for Big Blue, but after reading this book I realize I have a long way to go.

New York Giants: The Complete Illustrated History is available in bookstores and online booksellers and from www.mvpbooks.com