With our New York Giants facing the Tampa Bay Buccaneers this weekend, I traded questions this week with 'BucWildGuy' from our Bucs blog, Buc 'Em. His answers to my incredible questions are below. Check Buc 'Em for my answers to his queries.

Big Blue View: The first thing I think about when it comes to Tampa Bay is that Derrick Ward is there now instead of with the Giants. What are your impressions of Ward thus far? Is he having the kind of impact the Bucs hoped for?

WildGuy: I haven't been disappointed with Ward in the least. I don't think he's had a chance to show his stuff yet either, at least, not to his fullest capabilities. He's been in a very even split with Cadillac Williams and has even given some carries to Earnest Graham. Ward is currently over 4 YPC and when he gets the ball is a tough determined runner. He's shown good hands out of the backfield, which is a huge help. I haven't been able to really evaluate him as a pass blocker, but thus far he's been a huge help.

The Bucs would like to be a run first team and having him along with the other guys (Caddy, Graham) gives us a great 1-2-3 punch. I'm sure you and Giants fans can agree. In game 1 against Dallas, both he and Caddy were explosive and had great opportunities as the score was close. Ward looked like exactly what I thought/hoped he was. Of course, against Buffalo, we were down early so he didn't get as much playing time, but when he did tote the rock, he looks like a fit into our system

BBV: The season has not started well for the Bucs. Are you optimistic that things will turn around, or are you feeling like this will be a long season for Tampa Bay?

WildGuy: The optimist in me says we will turn it around, it's just a young team learning it's way. The realist in me says long year ahead. Our schedule isn't easy to open up and with a new system on each side of the ball and inexperience and youth all over the team, it could get out of hand fast. This will only be heightened if/when we bring in our rookie QB Josh Freeman. You don't typically see rookies come in mid-year and make huge strides. I'd love to sit here and tell the football world that the Bucs are gonna turn it around starting this week, but I'm fully expecting a rough year. They happen from time to time and as long as we make progress game to game and year to year, I can handle a down year. 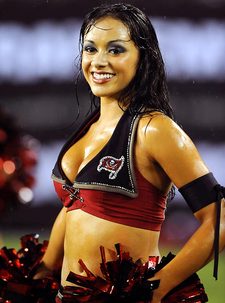 BBV: I really know nothing about Raheem Morris. Does he have what it takes to be a long-term success as an NFL head coach, or do you think his tenure at the top will be a short one?

WildGuy: Good question with no real answer. When he was hired, I was initially excited. A young, energetic guy who didn't spew BS as did his predecessor. As time has gone on, Morris' inexperience has come to light. The firing of the OC just before the season (after he hired him), the Talib arrest, the Jackson suspension, these are all reflections of any head coach, we just happen to have a new one. I think the length of his tenure depends more on year 2 and Freeman. Year 1 is almost a free pass, he was given a bare cupboard and told to cook a masterpiece. Well, he was given ingredients to make grilled cheese, not a 10 course meal. Next year will show his ability to teach, turn a team around, and see what the young QB can do. If he doesn't make progress, you could be hearing about the always popular "hot seat" and names like Schottenheimer, Cowher, etc.

BBV: Give me a couple of Tampa Bay players Giants fans might not know a whole lot about, but who we should keep an eye out for on Sunday.

WildGuy: Sammy Stroughter is developing into a nice #3 WR. He's a 7th round rookie out of Oregon State. Geno Hayes is looking good as a starter and, dare I say it, replacement of Derrick Brooks. The guys that drive our team, Leftwich, Caddy, Ward, Bryant, Clayton you know about. On defense, outside of Ruud, the aforementioned Hayes, and Aqib Talib, that's about it. In the run game I'd look out for Geno Hayes. Fast, quick hard hitting weakside linebacker. In the passing game (defensively) there isn't much to look out for. Our pass rush is non-existant. On offense, the names are familiar.

BBV: One of my favorite questions. If you could take one player off the Giants' roster and put him in your lineup, who would it be? Why?

The obvious pick to some people is Manning, but I feel pretty comfortable at QB. The main guy(s) I'd take are any of your dominant pass rushers. Tuck or Kiwanuka to start. Those guys get after the QB and we could use a dominant pass rusher. Feel free to leave one of them behind this weekend.

Thanks, 'WildGuy.' I have to make one comment on these answers. With Byron Leftwich starting, and the mess that the Buccaneer quarterback situation has been the past few seasons, I can't believe he passed on Manning in answering the last question.