A chat with Blogging the Boys

Share All sharing options for: A chat with Blogging the Boys

With the Dallas Cowboys on tap this weekend I had a chance to chat with Dave Halprin from Blogging the Boys. Here is our conversation.

Me: So, first question. Tampa Bay chewed up Dallas' defense with the run last week. How are the Cowboys going to deal with the Giants highly-regarded running game?

Me: Cowboys-Giants is always big. But, with this being the first game in 'JerryWorld' and all that how much of an impact do you think the atmosphere will play?

Me: Related question. What do you think of 'JerryWorld' and the 'Jerrytron?' A beautiful place the Cowboys deserve, or just a monument to Jerry Jones' greed? 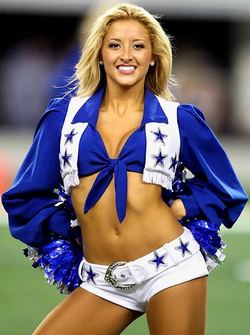 Me: Is this a 'different' Cowboy team this season w/out T.O. and 'Pacman,' and all that nonsense? Or, is it too soonto tell?

David Halprin: Well, it's too soon to tell in terms of the regular season, but it was a different offseason. Much more business like without all the circus that accompanied those players and a few others. It seems to have created some good chemistry on the Cowboys but that stuff is never really tested until the team struggles a bit, then you find out.

Me: In some ways, the same thing T.O. being gone from Dallas means. One huge distraction gone from a team that still has plenty of talent. It means we will find out if Eli Manning can succeed without a superstar wide receiver (I think he can). We'll find out how good Steve Smith, Mario Manningham, Hakeem Nicks, Kevin Boss, etc. really are. Sunday against Washington there were no problems in the passing game.

Me: Hard to say. Smith was the 'go-to guy' last season on third downs, and he still is. He is one of the best slot/possession guys in the business, and he is usually Eli's first target on third down. The jury is still out on whether he can be a vertical threat.

Me: I'm enjoying it, actually. We know the fans feel it, even though I think your folks and mine have gotten along pretty well this week. It's refreshing to actually hear players give real feelings, instead of just tired cliches that don't tell you anything. How about you?