Share All sharing options for: 5 Questions with 'Gang Green Nation'

Our New York Giants face the New York Jets in the annual pre-season battle for big city bragging rights tonight at the Meadowlands. With that in mind I reached out to John Butchko over at our Jets blog, Gang Green Nation, and we ended up swapping 5 questions.

Big Blue View: Your reaction to Mark Sanchez getting the starting QB nod? From a fan perspective, is this what you think most Jets' fans wanted?

Gang Green Nation: Sanchez’s ascension isn’t a surprise. The team traded up to get him and gave him $28 million guaranteed. If the Jets thought Clemens was the answer, they wouldn’t have grabbed Sanchez.

I’m a bit concerned people are going to expect too much too soon out of Sanchez. He’s a rookie and an inexperienced one at that with only sixteen college starts. The one advantage the Jets do have is they can lean on their defense and running game. He outplayed Clemens in camp so it looks like he does give the team the best chance to win.

Fans are really excited about Sanchez and have been since the day of the Draft. It’s been a long time since the Jets had a championship level quarterback. Is Sanchez that guy? Nobody knows at the moment but he has a chance. The fan base is in love with him right now so there’s a lot of buzz about the decision.

BBV: Your thoughts on Rex Ryan thus far in his tenure as Jets' coach?

GGN: If nothing else, it’s been entertaining. We don’t have much to go on in terms of actual results, but Rex has made plenty of headlines going after Channing Crowder and Bill Belichick. He’s definitely the polar opposite of the stoic Eric Mangini.

In the Baltimore game, the pass rush looked really good. It seemed like Joe Flacco was getting hit every time he dropped back against Ryan’s blitzing schemes. The Jets have a lot of defensive talent. One of the biggest complaints about Mangini was he didn’t utilize it properly. He rushed three more than any coach in the league, and his blitz schemes were unimaginative and ineffective. Fans are expecting that to change under Rex. 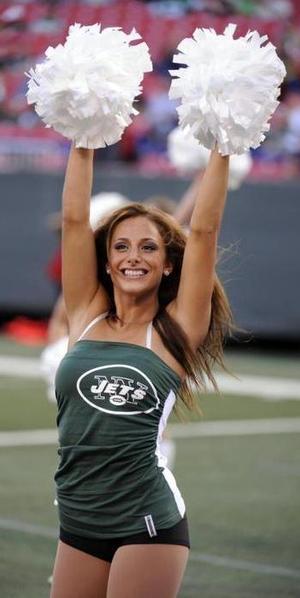 BBV: I talked with Tom Rock of Newsday, who has covered both the Giants and Jets, the other day. He said the difference in the fan bases is the "doom and gloom" attitude of Jets fans, caused mainly by the fact that many Jets fans have never seen their team win a championship. How do you feel about that?

GGN: Tom Rock is right. It’s not just that Jets fans haven’t seen a title in four decades. It’s that the team often falls short in the most catastrophic fashion imaginable from the Cleveland game in 1986 to blowing a 10 point lead in the 1998 AFC Championship Game to the Doug Brien game to losing the last three to miss the Playoffs in 1993 and 2000 to last season’s collapse. Then there are years like 1999 and 2003 where an early quarterback injury derails what looked like a promising season. How about Bill Belichick quitting and then making a bitter rival into the league’s model franchise. When bad things happen often enough, you just expect the worst possible outcome.

It probably hasn’t helped that we’ve watched our crosstown rival score two of the most dramatic Super Bowl wins ever in the past decade and compare it to the disaster that meets the Jets in clutch moments.

BBV: What players have had really impressive pre-seasons? Anyone been an obvious disappointment?

GGN: I’ll give you an offensive and a defensive player for both questions. On offense, David Clowney has picked up where he left off after last year’s monster preseason. He went over 100 yards in the first preseason game and had a long touchdown grab in Baltimore. It’s been a while since the Jets had a guy with the speed to stretch the field at receiver. Clowney can do just that. Word is he’s got the inside track on the starting job.

Defensively an undrafted rookie from Rutgers named Jamaal Westerman has turned heads. Rex Ryan has singled him out on multiple occasions. He played defensive end in college but has played effectively lining up at end, inside linebacker, and outside linebacker. He’s picked up the scheme so quickly that he’s making defensive calls for the second team in practice. Finding an undrafted free agent like Westerman is huge. It helps make up for all the late round picks the Jets gave up when they traded up for Mark Sanchez and Shonn Greene.

My offensive disappointment is Kellen Clemens. Sanchez definitely had the inside track to the job, but Clemens had eight games of starting experience and three years in the system under his belt. He was interception-prone in practice, and word is Sanchez outplayed him throughout camp. He lost the starting job as much as Sanchez won it.

The defensive disappointment is Vernon Gholston. Gholston showed nothing as a top ten pick as a rookie. Word is his camp was uneven, and it’s tough to remember his name being called in either preseason game so far. Starter Calvin Pace has been suspended the first four games, and Gholston hasn’t really shown he’s ready to step in.

BBV: Don't you wish you still had Brett Favre?

GGN: I can only imagine the Meadowlands will be half full during Jets home games because all the Jets fans will stay home to watch the Vikings on TV.