Where have all the linemen gone?

Share All sharing options for: Where have all the linemen gone? 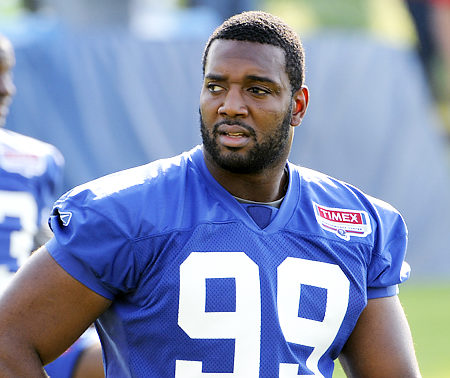 I was on the radio Saturday morning, as I was invited to talk about our New York Giants on 'GameFace,' (www.espn940.com). I bring this up not to toot my own horn -- though that doesn't hurt -- but, rather, because of one of the questions I was asked.

My answer was that it was way too soon to begin discussing that stuff. Today, barely two days later, that question seems downright silly.

Remember that five-man rotation the Giants were supposed to have at defensive tackle? Well, now Jay Alford's season might be over. Chris Canty has a torn hamstring and there is no word on when he might be able to play. Fred Robbins played a few snaps on Saturday, but he is working his way back from micro-fracture surgery and is nowhere near being ready to be counted on for a large number of snaps. Rocky Bernard has only practiced for a couple of days and is still very limited. The only reasonably healthy member of the defensive line the Giants thought they would have is Barry Cofield, and he also had knee surgery in the off-season.

Heap on top of all that injuries to Antonio Pierce, Kenny Phillips and Aaron Ross, and the injury/suspension of Michael Boley. Of those four only Ross -- in a limited way -- is expected on the field today at UAlbany for the second-last practice of training camp.

Suddenly, the whipping the Giants took up front Saturday against Chicago doesn't really look all that surprising.

"Until we get this thing straightened around with everybody on the field, this rotation and this depth that we are talking about really is a non-factor right now. We need people practicing and we need to be able to accomplish that," coach Tom Coughlin said Sunday. "I just think that for so long we have been (hearing) that we have so much depth. I don’t know what you are watching, but the guys who are supposed to be the depth have hardly even practiced. Some haven’t practiced, some haven’t played. I think you are talking about something that looks good, but hasn’t really materialized."

There are areas of concern just like there are on every team. But I think you have to earn that is said about you. What we believe in is that talk is cheap, let’s do it on the field. It has been very spotty on the field, so obviously it is time to get to work and get this the way we want it to be, for people to come to grips with the reality and be serious about making these corrections and then go out against a good football team and accomplish that and see if we can get it done on the field"

I just think that for so long we have been (hearing) that we have so much depth. I don’t know what you are watching, but the guys who are supposed to be the depth have hardly even practiced. Some haven’t practiced, some haven’t played. I think you are talking about something that looks good, but hasn’t really materialized." 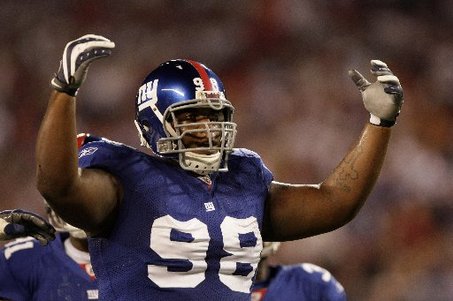 Saturday against the New York Jets you will likely be watching guys named Anthony Bryant, Leger Douzable and Jeremy Clark take a lot of snaps.

Yes, there is time before the September 13 opener against Washington. Time for Robbins and Bernard to round into shape. Maybe time for Canty to get healthy. Maybe time for Alford to discover his knee isn't as bad as we think it is.

This is not, however, the start the Giants had in mind when they collected all of this defensive talent.