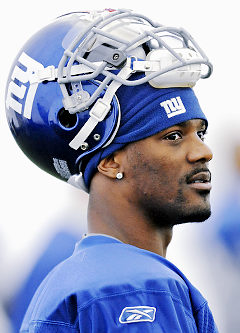 How good of a player is New York Giants' cornerback Aaron Ross?

Admittedly, Ross, the 21st pick in the first round of the 2007 NFL Draft, has not yet become the shut down type corner the Giants hoped they were drafting. But, has he been as bad as Football Outsiders would have you believe?

While Corey Webster built on his 2007 playoff performance and had a huge 2008 campaign, the rest of the secondary was unimpressive. Aaron Ross looked lost for most of the year, taking too many false steps and failing to make tackles downfield. Nickel corner Terrell Thomas looked very good as a rookie, and might end up taking Ross’ job if the former Texas star continues to struggle

I went back to my 'Kudos & Wet Willies' posts from last season to see if, as Roger Clemens would say, I "mis-remembered" how Ross fared last season.

He did have a pair of back-to-back poor weeks early in the season, giving up some long pass plays. And as I have thought it through more I do remember him spending more time defending the slot as the season progressed. But, he did not show up in the 'Wet Willies' category again after the sixth game of the season. That's hardly definitive research, but it's enough for me to think Ross was not terrible in 2008 -- which is what Football Outsiders seems to be saying.

At 6-foot, 197 pounds he is big enough to compete with many of the league's larger receivers. He is rangy and athletic, and he catches the ball well when he has the opportunity to make a play. He does have six career interceptions.

Yet, I recall watching him trail too many receivers and have to run them down from behind after catches in 2008. Does that mean he is being beaten off the line of scrimmage too often, or doesn't react well to a receiver's cut? I don't know. Is that just instinct, or can it be learned through experience? I honestly don't know that, either.

I do know that 2009 is a huge season for Ross. Hopefully, we will see him take a step toward becoming the elite corner the Giants hoped they were getting when they drafted him.