Who should return kickoffs for the New York Giants?

Share All sharing options for: Who should return kickoffs for the New York Giants? 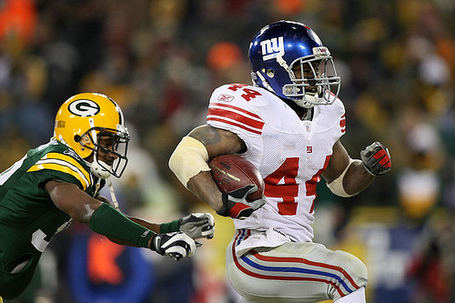 Ahmad Bradshaw has handled the majority of the kickoff returns duties for the Giants the past two seasons. (via nymaniac)

Here, I feel the same way as I did with punt returns. Domenik Hixon is clearly the best man for the job. He averages 29.3 yards per return for his career and is a threat to score every time the ball nestles in his waiting arms.

But, it is clearly unfair to ask him to do it full time since he will be such a key part of the offense.

The only scenario in which I see Hixon returning full time is if some combination of Mario Manningham, Hakeem Nicks, Sinorice Moss and Ramses Barden are so impressive Hixon can't get on the field next to Steve Smith.

Unfortunately for the return game, I think Hixon is too good of a receiver to let that happen.

So, if it isn't going to be Hixon returning kickoffs then who will it be? Let's look at the candidates.

Ahmad Bradshaw -- Obviously, Bradshaw can do this job. He has returned 77 kickoffs the past two seasons and is adequate. He just is nowhere near the breakaway threat Hixon is, and his 23.2 yards per return average shows that. I can live with him back there, but his lack of elite speed makes him less than an ideal kickoff returner.

Sinorice Moss -- Has the kind of speed you would love to see in a kickoff return guy, and the role makes sense if he is only the fourth or fifth wide receiver. Moss, though, has had two cracks at this job (a few games in both 2006 and 2008) and has yet to flourish. He averages just 20.2 yards per return, and has never broken a big one. Still, I would not be stunned if he is the guy. Tom Coughlin does like veterans (believe it or not, that's what Moss is now) handling the ball in those roles.

Danny Ware -- Could very well be the third running back for the Giants, and that makes him a candidate for this role. Derrick Ward did it when he was the No. 3 running back. Ahmad Bradshaw has done it for two seasons as the third back. Seems like it's been kind of a rite of a passage. Besides, Ware showed in the 2008 preseason that he might actually flourish in this role.

Andre Brown -- Same story for Brown. He might be the third back, and the kick return duties with the Giants sometimes seem to go along with that. The rookie did return some kicks at North Carolina State, but averaged only 201.1 yards on 17 career returns. So, this does not seem like an idea role for him.

DeAndre Wright -- The sixth-round draft pick was a collegiate return man, and I'm sure he will get a look. To make this crowded Giants' roster he will have to contribute on special teams, and this might be how.