Who should return punts for the New York Giants?

Share All sharing options for: Who should return punts for the New York Giants? 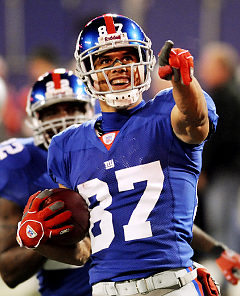 Every New York Giants' fan knows that Domenik Hixon is a spectacular kick return man. The Giants know this, too, which is why Hixon has returned kicks at the most important times the past two seasons.

We also know, though, that Hixon will play a key role as a wide receiver in 2009. If he isn't starting, he will still be playing a lot.

As much as I, and probably many other Giants' fans, would love to see Hixon handle all the return duties that seems highly unrealistic given his offensive workload.

So, today let's examine who -- other than Hixon -- could possibly handle punt return duties. We will look at kickoff returns another day.

Here is how I see the candidates. These are not in order of preference.

To me, there are no other 'obvious' candidates for the punt return gig. Did I leave anybody out? Your thoughts?