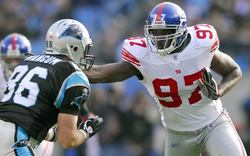 I don't know about you guys, but I am really looking forward to seeing what kind of player Mathias Kiwanuka becomes for our New York Giants this season.

Kiwanuka was OK last season, subbing for the injured Osi Umenyiora as the starting right defensive end. He recorded a representative 8.5 sacks, made 68 tackles and generally held up pretty well in his first season as a starting defensive end.

I have the feeling, though, that we did not see anywhere near the best that Kiwanuka has to offer.

Remember, Kiwi spent the 2007 working as an outside linebacker and only occasionally putting his hand down in the grass as a pass-rush specialist in long-yardage situations.

He spent all of the 2008 off-season and training camp preparing to be a linebacker as well, only shifting back home to defensive end out of necessity once Umenyiora was lost for the season during an exhibition game.

As well as he played at times, I don't think last season was a fair indication of the type of force Kiwanuka could become on the 2009 defensive line. His body, and his mind, were prepared to play linebacker. Kiwanuka repeatedly said last season that playing defensive end came naturally to him. There is no way he could have been as physically ready for the pounding a defensive end takes after working for more than a year on his linebacking skills. Not to mention coming back from a broken leg.

As the third defensive end in a rotation with Umenyiora and Pro Bowler Justin Tuck, a healthy, prepared Kiwanuka could be a tremendous force for the Giants. I don't know if there is another team in the NFL that has a trio of defensive ends as potentially dominant as the Giants. We have seen Kiwanuka and Tuck both rush from the inside, and you know all three will be on the field in passing situations. I can't wait to see it, with the match-up problems that will cause for opposing offensive lines.

New defensive coordinator Bill Sheridan knows that his defensive line depth, at both end and tackle, could make this a special group. During OTAs in June Sheridan spoke about getting all of the defensive linemen playing time.

Usually, when we have to make cuts for the final roster, you are basically carrying two deep. In a sixty, sixty-five play game, sure. All those guys will be playing at least twenty, twenty-five snaps. Your starters will be playing forty or more. Yes, there are enough snaps. It is a great problem to have. It was an issue (last year). You know how guys get nicked up during the season. You are going into some games when you are not really in a full two deep strength. They will be playing hard, too, because they won’t be playing sixty five straight snaps.

I really believe that Kiwanuka, going all-out after opposing quarterbacks 20-25 times per game could do some really special things for the 2009 Giants.

I can't wait to see them happen.