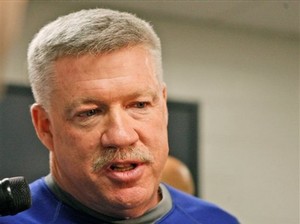 One of the most fascinating parts of the upcoming season for the New York Giants will be how they sort out all the new offensive toys they have, and how offensive coordinator Kevin Gilbride chooses to play with them.

Mentioning Gilbride's name, of course, almost always guarantees an emotional reaction from Giants' fans. He is the guy Giants' fans love to hate -- and the guy who we love to blame every time anything goes wrong offensively.

Gilbride is the man of many nicknames among Giants' faithful -- none of them complimentary. Kevin KillDrive and Kevin GilGarbage come to mind. You guys probably have a few others, some of which I might prefer not to hear.

Long-time BBV readers know that I like Gilbride. He is far from perfect and he sometimes makes me wish I could go all Buddy Ryan on him, but all-in-all Gilbride is pretty darn good at his job. I think the overall offensive numbers, the fact that the Giants won a Super Bowl with him calling the plays and the respect Gilbride has around the league speak to that.

Let's take a closer look at the Giants' offense last season, then we will turn our attention to what we miight see in 2009.

The numbers tell you the Giants had a very good offense in 2008.

Love him or hate him, objectively you have to be willing to give Gilbride at least some of the credit for these accomplishments. When you go to kvetch about Gilbride, and I know you will, just remember how much better the Giants have been offensively since KG took over the reigns from the truly incompetent John Hufnagel.

Gilbride is highly thought of around the league. The Sporting News, using a panel of former NFL scouts, recently ranked Gilbride at the fourth-best offensive coordinator in the league. Many of you probably just spit up your orange juice reading that line. Here is what TSN said about KG.

He couples power runs with downfield passes. His philosophy relies on big, athletic man-blockers on the line to wear down defenses with the run and set up play-action passes. The Giants control the clock with a basic and conservative offense that capitalizes on defensive mistakes. 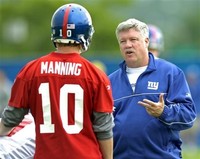 Gilbride's Giants.com bio is, admittedly, not an objective look at KG, but it does show that Gilbride has coordinated some highly successful -- and even imaginative -- offenses throughout his career.

That said, we all know Gilbride has his flaws. In their last six games of 2008 -- roughly the post-No. 17 era -- the Giants scored more than 30 points just once.

I'm not buying the argument that seven or eight weeks is not enough time for a veteran NFL coach to examine the strengths and weaknesses of the players he has remaining and make adjustments to his game-planning and play-calling to fit those players. There were adjustments that needed to happen at the end of last season, and they weren't made. That brings me back to those Gilbride flaws.

I honestly don't think it is fair to kill Gilbride for an individual play call, or for a play that simply doesn't work. Every coach has made decisions they regret. Besides, players sometimes screw up. Bad stuff happens.

Overall, Gilbride's body of work has been a good one.

That said, let's turn the page to 2009. Obviously, Gilbride will have a much different set of weapons to work with in 2009 than he had the past two seasons.

Can he take advantage of the talents of Ahmad Bradshaw, and the other guys who will back up Jacobs?

The Giants may not have a guy on the outside who consistently needs to be double-teamed, but they do have a plethora of talented weapons. They should be able to create mismatches with the varied talents of the players they have.

That will be Gilbride's primary challenge in 2009. The success and failure of their offense, and largely their season, rides on his ability to figure it out. There will, I am sure, be bumps in the road. I have to believe, however, that

(NOTE: I hesitated to write this because I know KG generates some emotional responses. Please do better than 'Gilbride sucks' in your comments. Let's have a rational discussion).