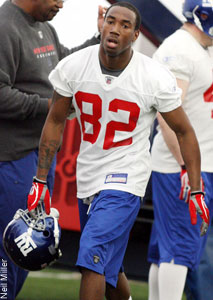 Our New York Giants have lots of talent at wide receiver. Right now, though, they have more questions than answers.

One of the biggest questions is 'what will they get from Mario Manningham?'

We know the story with Manningham. Drafted out of Michigan in the third round in 2008 in the hopes that he would become the play making wide receiver the Giants keep trying to draft, but have not been able to get quite right in recent years. His rookie year was a colossal waste, with a quad injury limiting his development. He ended up with just four catches for a pitiful 26 yards.

"It was frustrating," Manningham said. "I didn’t play that much. I got injured in camp. Injuries are part of the game. It’s nothing you can run away from. It did set me back a little bit, but I’m all right now."

Where does Manningham fit in the current group of Giants' wide receivers? Our man 'jrs' recently broke down the battle for roster spots at wide receiver, and the reality is, nobody knows for sure.

Manningham could play well and wind up starting. He could flop miserably and wind up wearing another team's uniform in September. The wide receiver competition is that wide open.

"I feel like it is an opportunity for all the receivers. I don’t think all the focus is on me. We’re a wide receiver unit. We’re all going to try to get each other better in the weight room, in the meeting room and on the practice field."

Manningham, 23, caught 137 passes for 2,310 yards and 27 touchdowns at Michigan. He says he feels much more prepared to flash that form this season.

"I can just go out there and let my athleticism take over," said Manningham, who turned 23 last week. "When you’re a rookie you’re going out there trying to remember the play and getting your splits down right. You don’t remember half the play. I’m better. Way better. It’s just going out there and playing now."

We will just have to see how it plays out. Personally, I hope Manningham plays so well he pushes Hixon right back into the kick return role.