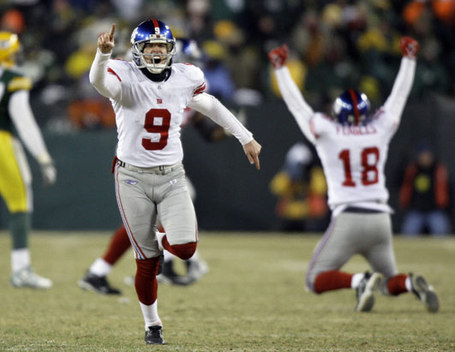 No matter what your reaction to Tynes, you might as well get used to him. John Carney, who subbed spectacularly for Tynes last season (35-for-38 in field goals, including two blocks) and kept him chained to the bench, is gone. Barring injury, Tynes is your kicker. For better or worse.

In a release from the Giants, Tynes said he made the most of what was basically a year of inactivity in 2008 (he only appeared in three games).

“I feel great, I’ve lost some weight and I’ve changed my technique on field goals and kickoffs,” Tynes said. “I made my stance a little more upright and lead with the chest more. I’m not a hundred percent comfortable with that yet, but when I do hit the ball and I do get in a groove, it’s amazing how well I’m kicking the ball. I’m not missing with the ball to the right as much as I used to. My misses are more left, which is a good thing. I think it’s going to help me in the long run.

“If you don’t you’re always going to be the same. And I think what I did in ’07 wasn’t good enough, to be honest with you. I just wanted to change something and work on that. I’m doing well with it, but when I feel confident about everything I’ll be a better kicker for it.”

Tynes is going to stick around once mini-camp ends to continue working on his technique changes. He is aiming to be at least as efficient this season as Carney was in 2008.

“I think what John did last year set the bar pretty high with what I need to do,” Tynes said. “Someone asked me what I expect to do this year and I said, ‘What John did and better.’ He was at 92 percent and I have to be there or higher, which I can do and we can do as a unit and as a team. We don’t want any drop off from what John did. I hope I can exceed that or be around that number. That’s my goal.”

If he comes close to that, I don't think Giants' fans will have anything to complain about.