Share All sharing options for: The Glory Game: How the 1958 NFL Championship Changed Football Forever: Review 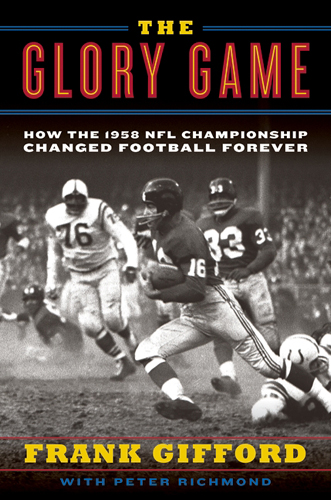 If you've never read a story or caught a highlight film of "The Greatest Game Ever Played", the 1958 NFL Championship Game between the Giants and Colts, you'd probably think it was a classic well-played battle between two teams who stood toe-to-toe at the 50-yard line and slugged it out.

When you read "The Glory Game: How the 1958 NFL Championship Changed Football Forever" by Frank Gifford, you'll realize that was anything but true. Giff refers to the first two quarters as "the worst half of football we'd played all year", and when you hear him tell it, you'd be hard pressed to argue with him. The game is broken down almost play by play here, and Giant fans of all ages will be amused to hear of the Giants struggles to score points in those days and their need for the defense to keep them in the game. (sound familiar?)

"Glory Game" is a book Gifford never intended to write. He was originally contacted by author David Halberstam, who informed Gifford that he would be writing a book on the 1958 game, and would like to meet with Frank and get his insight. Unfortunately, David was killed in a car accident in April 2007, and Gifford decided to write the book as a tribute to David as well as the players in that famous 1958 game.

Gifford does a wonderful job of describing what it was like to be a New York Giant in the days before agents, major endorsement deals, and ESPN. It's an amazing look inside the life of an NFL player before they were millionaires.

While it is impossible to spoil the end of this story, since there probably isn't a football fan alive who hasn't seen the video of Alan Ameche scoring the winning touchdown, I can tell you that the storytelling is so well done, you'll find yourself getting caught up in it, and actually forgetting that the Giants lost this game. 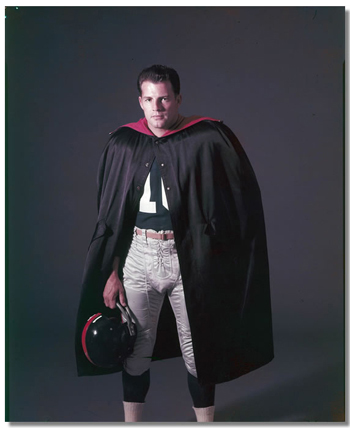 Giff manages to capture the thoughts of many of the players from both teams who are still with us. Pat Summerall, Sam Huff, Art Donovan, Alex Webster, and Ray Berry are just some of the particpants in this book, and some of the stories you've probably heard before, but in this book they manage to still sound fresh.

There are some surprises in this book, at least for me. I don't want to spoil any of them, but I can tell you that one of them involves Vince Lombardi, and his disappointment at not getting the only coaching job he ever wanted.

Whether you are a Giants fan who was around in those days, or if you've read this review and said "Who the heck is that?" a half-dozen times, give this book a read, you won't be disappointed.