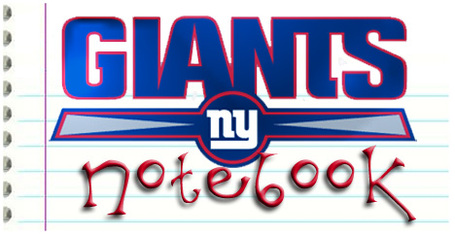 A few topics to hopefully stir up some discussion out there in Giants land today.

"Preparation is the key for the detail-oriented Coughlin. His team is ready to play every Sunday."

"You have the guys around the locker room, just hanging out, eating lunch together, those types of things, it makes the team closer," said quarterback Eli Manning, one of the ones who often excused the absentee players. "It makes everybody feel comfortable around each other. Everybody’s the same, no one’s getting special treatment, special attention. I think we have a great group of guys here. They come in and work. No one has an ego about anything. We’re here to practice hard and have some fun also."

Are you seeing a pattern here? Strengths can be weakness too? It would be foolhardy to dismiss the loss of Derrick Ward. He wasn’t just a change of pace, he was a starting quality running back. When Brandon Jacobs was hurt or ineffective the Giants had a go to guy on the bench. Remember it wasn’t just Jacobs wearing out the defense for Ahmad Bradshaw's long runs at the end of games. It was Derrick Ward running by linebackers on pass patterns and laying the lumber on the inside runs as well. Jacobs has never played a whole season, Bradshaw has never played a whole game and Ware and Brown have never really played at all. If one domino falls the wrong way the best running game in the league could falter and falter quickly. Without it the passing game becomes vulnerable and the defense spends too much time on the field and the Giants watch the playoffs from the comfort of their living rooms.

He has a valid point, but ultimately I'm not too concerned about the run game. I think Jacobs is an elite back if he can stay healthy, and I'm pretty excited for what Danny Ware can bring to the table. Add in Bradshaw and Brown, and I think it's a pretty solid mix of guys. As for Eli, well, my feelings about him pretty much change with the wind (pun intended), but we simply don't know how he'll do without Plaxico and/or in bad weather and those questions probably won't be answered fully until next January.