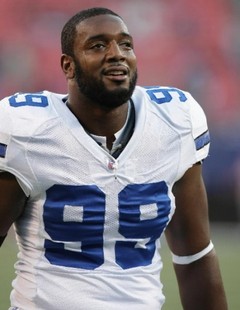 Our New York Giants have had a busy off-season.

There was all the Plaxico Burress nonsense, leading to his ultimate release. There was, and still is to some degree, all the speculation about how the Giants would replace him.

There has been the promotion of a new defensive coordinator, Bill Sheridan, to replace the departed Steve Spagnuolo.

There were all of the free-agent defensive signings, including Chris Canty and Rocky Bernard on the defensive line, Michael Boley at linebacker and C.C. Brown at safety.

As much as we speculate about the possible impacts of all the rookie receivers the Giants added, it is quite possible that the new Giant who could make the biggest impact is Canty. The 6-foot-7, 304 -pounder comes to the Giants after spending four seasons with mixed success in Dallas.

Blogging The Boys, SBN's outstanding Cowboys' blog, wants us to believe that the six-year contract Canty signed, one that guaranteed him $17.25 million, is way too much for an inconsistent player who never lived up to his potential.

This is what Dave Halprin, lead blogger over at BTB, told me way back when the signing first happened.

Chris Canty is a pretty good player but the contract you guys signed him to is not something I would be willing to give him as a GM. That's just too rich for the production we got out of him for four years. He was a solid contributor but never blossomed into the dominant force we thought he would be. He played DE in our 3-4 so he took on a lot of double teams which limited his stats but he was a guy who could really disappear during a gme for long strecthces. He plays the run well enough but he never got a lot of penetration and rarely disrupted plays in the opponent's backfield. Physically he looks the part and maybe playing in a 4-3 will unleash his inner beast. But we got tired of waiting for that.

I certainly understand the sentiment among Cowboy fans. There is some truth to the feeling that Cant's numbers as a Cowboy (10 career sacks in four years) are not tremendous. Also, however, Cowboy fans have to feel stung by losing a player like Canty to a division rival.

There are plenty of others, however, who feel that Canty's move from a 3-4 defensive end to a 4-3 defensive tackle will turn him into a dominant force.

The other day we mentioned a Sporting News ranking that had Canty as the league's fifth-best defensive tackle. That is kind of hard to justify since he has never taken a snap there, but it shows the respect his talent commands.

ESPN's Matt Mosley also thinks Canty will have a tremendous impact on the Giants' defense, which occasionally got pushed around in the middle in 2008.

I think Canty will flourish in the Giants' 4-3 defense. He'll help collapse the pocket and knock down passes with his huge wingspan. He'll also move outside and play defensive end in some sub packages. He never quite lived up to his enormous potential in Dallas. I think there's a chance he becomes a Pro Bowl player with the Giants. Tom Coughlin's already in love with him because he's watched him play so much. Very underrated move by the Giants.

Canty recently told the Dallas Star-Telegram that he believes his numbers will go up playing inside with the Giants.

Thing is, Canty does not have to be a super star to be a huge help to the Giants' defense. He simply has to help neutralize the running game, pressure the passer when given the opportunity. His presence alone, on a team thin in the middle last season, makes the Giants better.

Sorry, Cowboys' fans. This was an excellent move for the Giants.