Rankings: Eli in the top 10

Share All sharing options for: Rankings: Eli in the top 10 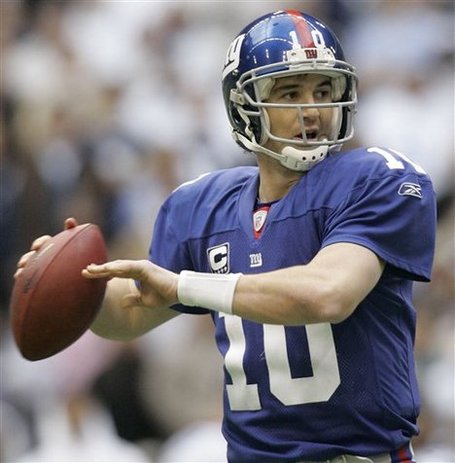 I generally hate off-season rankings -- player rankings, team power rankings, whatever. That said, in the dead of the off-season long before training camp begins they at least give us something to talk about.

With all of that soapbox preamble aside, it brings me to my point. The Sporting News (yes, The Sporting News still exists!) has come out with its position-by-position NFL player rankings, courtesy of something called 'Real Scouts.'

In its quarterback rankings, TSN puts Eli Manning ninth, then ducks for cover figuring that placement will anger Giants' faithful.

Plaxico Burress and Amani Toomer are gone, and we're not sure he will have a go-to receiver in '09. If they are relying on rookie Hakeem Nicks, Manning is in trouble. Elite quarterbacks can carry teams on their back, but Manning failed last year when Burress and Brandon Jacobs got hurt. The Super Bowl 42 win was great, but this is a what-have-you-done-for-me-lately league.

Actually, I am perfectly fine with this ranking. It puts Eli just behind Donovan McNabb and Kurt Warner, and just ahead of Tony Romo. You can quibble over who goes where in that group, but at least Eli is finally getting recognition as a top 10 guy.

According to TSN, here is how the Giants stack up at some of the other positions.

Again, none of this really proves anything. I am sure, though, that you guys have some thoughts on these.