A chat with 'Blogging The Boys'

Share All sharing options for: A chat with 'Blogging The Boys'

In our off-season chats with bloggers from the other NFC East teams, we have finally gotten around to the Dallas Cowboys. That means a Q&A with Dave Halprin, the guru of Blogging the Boys.

The Cowboys have had an interesting off-season, and here is the chat Dave and I had about it.

Big Blue View: The Cowboys had what I would term an 'odd' draft. As Chris Berman would say they kept moving 'back, back, back' and ended up with 12 picks beginning in the third round. What did you think of the draft?

Blogging The Boys: We actually had 11 picks going in, so while we moved back on a few occasions, we only added one extra pick in the end. This draft was about filling specific roles. It was hard to imagine picking someone in the 3rd round or beyond that was going to challenge for a starting spot. As badly as we finished last year, most of our starters were not going to lose their spots. We needed a nickel ILB, so we picked up two guys for that. We needed safety depth, we got two candidates for that. We also needed some more corners and OLB’s for depth, we got those. The only thing we truly missed out on that most Cowboys fans expected to see was a backup NT, and maybe some more WR help. This draft was about depth, and it was also about shoring up a horrible special teams unit. Many of these guys are excellent special teams players, a phase of the game that lost us games last year. One other common theme, most of them are high-character guys with no red-flags. The Cowboys are trying to clean up their locker room.

BBV: Is there one player the Cowboys got in the draft you are particularly excited about?

Blogging The Boys: Jason Williams, linebacker and our 3rd-round pick from Western Illinois, is a guy I’m very intrigued to see. He comes from a small school, I’ve never seen him play and he didn’t get an invite to the combine even though he was very productive in college. But at his Pro Day he blew the scouts away with his physical skills. In college, he set a record for causing 14 fumbles in a season. He’s under-sized as a 3-4 ILB, but we want to use him in the nickel as a speed/coverage guy who will also blitz. Stephen Hodge, a converted safety now playing the same ILB role as Williams who was drafted in the 6th-round out of TCU, is also a guy that has been getting praise from the Cowboys coaches. 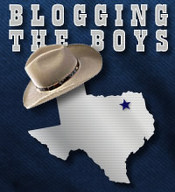 BBV: Assess the Cowboys' off-season, including the impact of the release of Terrell Owens?

Blogging The Boys: The Cowboys had a very good offseason in my estimation. We got rid of Pacman Jones and Tank Johnson, two guys with troubled pasts that weren’t really producing in the way we wanted. Safety Roy Williams was let go, he was a huge liability in coverage. We traded CB Anthony Henry who was in decline. And yes, we released T.O., a guy who produced but was starting to fracture the locker room. WR Roy Williams is elevated to the #1 guy and Miles Austin is being counted on to provide the deep-threat on the opposite side. Igor Olshansky will replace Chris Canty, we consider that an even trade for less money, if not an upgrade. Keith Brooking should be better than the departed Zach Thomas. Jon Kitna is a huge upgrade over Brad Johnson. The draft was full of good character guys, and many were good special teams players, something we desperately needed. I’m happy with the direction we’ve taken so far. But it means nothing until we see them all play in 2009.

BBV: I know your readers aren't thrilled about it, but the common perception of the NFC East right now is that the Giants and Eagles are the powerhouses, and the Cowboys and Redskins are a step behind. How do you feel about that?

Blogging The Boys: That’s what the record shows from the last couple of years. The Giants got a Super Bowl two years ago and won the division last year. The Eagles got into the playoffs and absolutely humiliated us on the final day of the 2008 regular season. The perception doesn’t bother me though, who cares what everybody thinks, it only matters what happens on the field in the 2009 season. I’ll take our chances with any team in the division. Our roster has the talent to compete with anybody; we just have to prove it on the field. I think we’ve taken some steps in the right direction this offseason in improving the team concept and creating better team chemistry. We’ll see if it works.

BBV: The Giants, as you know, signed former Dallas defensive lineman Chris Canty. You told me before that you thought the Giants overpaid for him. Tell us a little more about what the Giants can expect from Canty?

Blogging The Boys: Yeah, we still believe that was an over-payment. Canty was a guy we always thought could be a major force, his physical skills should have made him a disruptive player. But he was very inconsistent, sometimes disappearing for long periods of time. He played DE in a 3-4, so his first job was to hold his ground against double-teams on running plays, allowing the LB’s to flow to the ball. He did that fairly well. Problem is, you can get players like that for much cheaper. We just did with Olshansky. Canty was never able to consistently get into the offensive backfield and disrupt plays. If you are going to pay as much as you guys did, he needs to do that regularly. Now, if you use him differently in a 4-3 set, perhaps he will become that kind of force, he certainly has the physical skills to do it. If he can, then you got a good deal.

BBV: Were you surprised the Giants did not pull the trigger on a Braylon Edwards trade?

Blogging The Boys: Somewhat, although Edwards has terrible hands for an elite receiver. I am surprised at the WR corps you guys have going into the season. It’s very dependant on young guys with no proven #1 to provide that stabilizing force, although some of the young kids, including your draft picks, look promising. I know Roy Williams has been inconsistent for Dallas, but he has had some productive years and that was playing for the crappy Lions, so he should be at least an okay #1 WR. He should be able to produce in this offense with Romo at the helm. Bottom line: I think a lot of people are surprised at the youth and inexperience of the Giants WR’s.

BBV: What, in your mind, is the biggest weakness the Cowboys have not yet addressed this off-season?

Blogging The Boys: I’m concerned about the strength of our defense up the middle. We have a huge drop-off in talent after NT Jay Ratliff. Ratliff is a stud, but he needs someone to give him a break every so often and the options so far aren’t up to what I’d like to see. Keith Brooking is taking over at WILB from Zach Thomas. Brooking was a great player, but we have to see how much he has left. He did have some of his best years in Atlanta under Wade Phillips in this defense, so we’re hoping he can solidify a position we’ve had continuous problems at. We lost Kevin Burnett as the backup WILB and nickel guy, so we’re relying on rookies or vets who haven’t produced yet to take over that spot. Finally, the strong safety position. Roy Williams is gone, which was a good move, but we are going to have to see how free agent Gerald Sensabaugh plays. The depth at this spot is also an unknown. So, the middle of our defense has some real question marks.