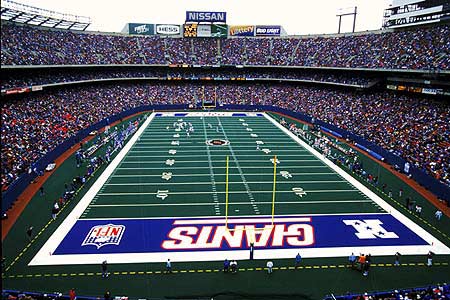 I've really enjoyed taking this walk down Paterson Plank Rd. re-living some of the Great Moments in Giants Stadium's history. Today, as the series draws to a close, I wanted to go over some of my favorite personal moments:

Sunday October 24th, 1976: Steelers 27 Giants 0. My first trip to Giants Stadium, I was 6. I don't remember much from this game except it rained the whole game, and Pittsburgh took a penalty when one of the Steelers taunted the Giants by getting in their huddle.

Sunday September 14th 1980: Redskins 23 Giants 21. Giants home opener in 1980. I think Mark Moseley kicked a late field to win this one for the Redskins.

Sunday November 15th 1981: Redskins 30 Giants 27 (OT). Scott Brunner took over for Phil Simms in this game and rallied the Giants, but they fell short in OT. I missed the end of this game because I was cold and wanted to go home. (I was 10)

September 23rd, 1984: Giants 17 Buccaneers 14. I'm on a two-game winning streak! I remember this being a really sloppy, boring game.

November 23rd, 1986: Giants 19 Broncos 16. George Martin picks off Elway and runs it back for a TD, LT running stride for stride with him all the way. Allegre hits a late field goal to win it.

December 15th, 1990: Bills 17 Giants 13. In a driving rainstorm, Phil Simms breaks his foot, and is lost for the season. It was so foggy and rainy, you could barely see what was going on from our seats.

You're probably wondering why so many of my great moments are games the Giants lost. Well, sometimes the experience outweighs the results. You see, I went to each one of these games with my Dad.

We weren't fortunate enough to have season tickets, my Dad was on the list for about 15 years before he gave up, but usually once or twice a year we'd get hooked up one way or the other. The list you see here are all the games I was able to go to with him.

My Dad is the one who taught me about Y.A Tittle, Kyle Rote, Alex Webster and Ron Johnson. He took me to Pace University in 1981 for Giants training camp and as we watched them practice, he said "Number 98, that's Taylor, the guy they drafted, supposed to be one hell of a linebacker." (Lawrence Taylor wore 98 in college, and with the Giants in training camp, and I've still got the slides to prove it.)

He's also the voice of Giants reason in my head, whenever people get too down on Eli, and talk about Phil Simms with such reverence, I can still hear my Dad yelling at Phil, and I remember we didn't always love Number 11 either.

As I get older, another important thing my Dad has taught me is that sometimes staying home and watching the game in HD with a fridge full of food, no beer lines, and not having to pay to park is nice, too.

I grew up about 15 miles from Giants Stadium, and driving by it as a kid was always something special. Even today, whenever I visit NJ, when I see Giants Stadium, I feel like I'm home. I still haven't gotten used to the idea that it's not going to be there for much longer.

If all goes well, the Giants will play their last game in Giants Stadium in late January of 2010. After that, who knows, maybe another Championship celebration will take place there a few weeks later, and then the "House that LT Built" will be demolished in the name of progress and personal seat licenses, and a big piece of growin' up for me goes with it.

So to my Dad, and to every Dad out there who taught his son to bleed Giant blue, these memories are for you.