The Giants' Draft: A Historical Perspective, Part I

Share All sharing options for: The Giants' Draft: A Historical Perspective, Part I 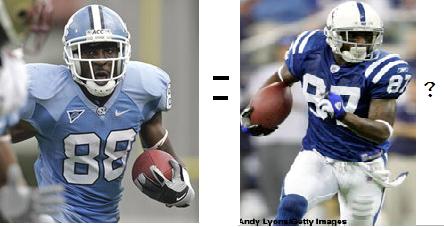 Hello BigBlueView, in my first official front page post I’m going to be taking a look at the players the Giants drafted on a pick-by-pick basis and comparing them to players picked around that slot in previous drafts, to come up with a sort of best case/worst case scenario for each of the Giants new rookies. I’m only going to look at the post-merger drafts, and will try to find players picked as close to the same slot as our incoming rookies as possible.

Today I’m going to look at our first-day picks, and tomorrow I will take a look at our second-day picks. I should point out that I’m not looking for guys with similar skill sets, but am just trying to show what types of talent has been available in the past at the positions the Giants took and at the slots in which they were drafting.

Best Case Scenario - Since the merger, there have been three wide receivers chosen with the 29th pick. The best of these was Derrick Alexander, a 6-foot-2 receiver who was drafted by the Cleveland Browns in 1994. He made an immediate impact as a rookie, catching 48 balls for 828 yards. In his career with the Browns/Ravens, Chiefs, and Vikings he had three 1,000+ yard seasons. From 1996-2000 he averaged 63 catches and 1,065 yards per season. Also drafted 29th was current Falcons wide receiver Michael Jenkins during the 2004 draft.

However, if we wanted to find the best possible scenario for Nicks, we could look at a player taken one slot later, the 30th pick in the 2001 draft: Reggie Wayne of the Indianapolis Colts. Reggie is coming off his 5th consecutive 1,000-yard season and has established himself as one of the elite Wide Receivers in the NFL. Nicks was the 5th wide receiver taken this year, while Wayne was actually the 6th receiver taken in ’01, behind such luminaries as David Terrell, Rod Gardner (way to go Dan Snyder), and the one and only Fred-X, Freddie Mitchell (way to go Andy Reid).

Worst case scenario - R. Jay Soward, the 29th pick in the 2000 draft by the Jacksonville Jaguars. Soward had some serious red flags coming out of USC, admitting to smoking marijuana almost every day and almost getting trampled by the USC mascot (I kid you not). He ended up only playing 13 NFL games, catching 14 balls for 108 yards. Also, honorable mention to Rae Carruth, who was drafted with the 27th pick in 1997 and who makes Plaxico look like a choir boy. Let's all say a silent prayer that Nicks doesn't end up like any of the guys mentioned in this paragraph.

Best Case Scenario - Nine linebackers have been chosen with the 45th pick in the draft, and the best of them to date was probably Phil Villapiano, taken by the Oakland Raiders in the 1971 draft. Phil played 13 seasons in the NFL between and , appearing in 4 Pro Bowls and helping the Raiders win Super Bowl XI. If you include middle linebackers in the equation, Lofa Tatupu was taken 45th by the Seahawks in 2005 and is amassing a nice career. There’s nobody, however, taken in the 45th slot who compares with a middle linebacker taken 46th overall by the Steelers in 1974 – Hall of Famer Jack Lambert.

Worst Case Scenario – Rahim Abdullah, drafted 45th in 1999 by the Browns. Abdullah played a total of 29 NFL games over two seasons, recording 55 tackles as a rookie but only 16 in his second season before moving on to the CFL. In 2007 he was suspended from the CFL for kneeing another player in the neck.

Best Case Scenario – Only 3 tackles have been taken with the 60th pick, and the best of these was definitely Tim Stokes, the 1974 pick of the then Los Angeles Rams. Stokes played 9 years in the NFL (including part of the 1981 season with the Giants) and was a starter for 4 years split between the Redskins and the Packers. Vaughn Parker, taken 63rd in 1994 was a 7-year starter for the Chargers. You’d have to go all the way to the 70th pick of the 1991 draft to find a Pro Bowl tackle, Erik Williams of the Cowboys.

Worst Case Scenario – Neither of the other two tackles taken with the 60th pick played in the NFL for more than a season, but one of them at least was a starter during that one season. The worst case scenario here is clearly Rusty Russell, picked by the Eagles in 1984. Russell only appeared in one NFL game in his career. The other pick was John Sinnot by the Rams in 1980. Though he never played for the Rams, he started 7 games in 1982 for the Baltimore Colts. I think if Beatty turns out like either of these guys, we’ll all be pretty disappointed. On the bright side, neither of these two have been implicated in any shootings, kneeings, or run-over-by-horse-ings, so I guess that's a positive.

As I said in my intro, I’m not comparing the skill sets of the players the Giants drafted to any of the guys mentioned here. All I’m trying to do is illustrate the type of talent that has been available at the slots in the draft where the Giants picked this past weekend. I think we’d all be thrilled if Nicks turned out to be as good as Reggie Wayne, Sintim becomes the next Jack Lambert, and Beatty starts for half a decade, but it’s pretty unlikely that all three of those will happen. And who knows, maybe in 15 years some first-time blogger will be looking at his teams 60th overall pick and saying "man, maybe he can become the next William Beatty," – after all, before Jack Lambert came along the best ever 46th pick wasn’t too impressive, either.