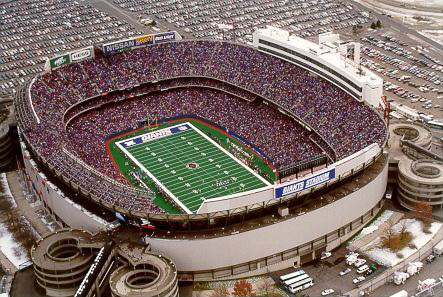 As we prepare for the final year of Giants Stadium, let's take a look at some of the other great moments that took place there:

197?: Fact or Fiction? The remains of Jimmy Hoffa, whose disappearance coincided with construction of the stadium, are rumored to have been buried under one of the end zones at the field. Sportscaster Marv Albert once said that a team was "kicking towards the Hoffa end of the field."

October 1, 1977: Pelé closed out his legendary career in front of a capacity crowd at Giants Stadium. In an exhibition match televised nationwide and worldwide, he played the first half with the Cosmos and the second half with his old team Santos.

1983: The New Jersey Generals of the USFL begin play at Giants Stadium.

September 6th, 1984: The New York Jets play their first home game at Giants Stadium, a 23-17 loss to the Steelers. Thanks largely to the dual occupancy of Giants Stadium by two NFL teams since 1984; it has surpassed Wrigley Field (home of the Chicago Bears for fifty seasons) as the venue to have hosted more NFL games than any other in league history. The game played between the Jets and Miami Dolphins on September 14, 2003 was the 366th regular season NFL game at Giants Stadium breaking Wrigley's regular season record[]

September 4, 1995, Phil Simms' jersey was retired in a halftime ceremony of a game versus the Dallas Cowboys. During an emotional speech, Simms stated that he wanted to don his jersey one final time, and throw "one more pass" to teammate Lawrence Taylor. Simms then motioned for Taylor to run a longer pattern, and after 30-40 yards, threw him the pass. Taylor later stated that the situation made him more nervous than any play of his career, "I'm saying to myself 'If I drop this pass, I got to run my black ass all the way to Upper Saddle River because there ain't no way I'm going to be able to stay in that stadium'." Taylor caught the pass however, and the capacity crowd in attendance cheered in approval.

October 5th 1995: The largest crowd to ever attend an event at Giants Stadium was 82,948, as Pope John Paul II celebrated Mass during a rainstorm on

October 23, 2000: In what has been called the greatest game in Monday Night Football History, the New York Jets come back from a 30-7 deficit by scoring 30 points in the fourth quarter and another 3 in overtime to beat the Miami Dolphins 40-37. The game is known as the Monday Night Miracle.

September 19th, 2005: Saints use Giants Stadium as home game for game against Giants after Superdome is badly damaged from Hurricane Katrina.

September 4th, 2008: The Giants beat the Skins 16-7 in their home opener; Michael Strahan appears during the pre game with the Giants Super Bowl 42 Lombardi Trophy.

Check back next Thursday for the final edition of the "Great Moments in Giants Stadium History".