Ok, so while not many Giant losses can be considered "Great Moments in Giants Stadium History", there are a few on the list. This is one of them. It was simply too historic a night to exclude from the list, and also because this game put the Giants on the road to destiny. 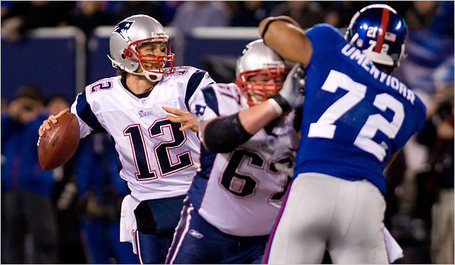 The Giants headed into their last game of the season with a dilemma: They were 10-5, had clinched a playoff spot, and knew that no matter what happened in their season finale against the New England Patriots, their first round opponent would be the Tampa Bay Buccaneers on the road. But the Pats were coming to East Rutherford at 15-0, and looking to become the first team in NFL history to finish the regular season 16-0. The Giants were torn between resting their players for a game that meant nothing in the standings, or playing their starters and trying to deny the Patriots their shot at history.

As Herm Edwards once took the time to say in between incoherent statements, "You play to win the game!"

The Giants gave the Patriots all they could handle, jumping out to an early 7-0 lead. The Pats got a field goal, then took the lead on a Tom Brady TD pass to Randy Moss, but Moss was flagged for over-celebrating on the TD. Domenik Hixon took the ensuing short kickoff 74 yards for a touchdown and gave the Giants a 14-10 lead.

The Pats got 2 FG's in the 2nd quarter go ahead 16-14, but the Giants got the ball with 2 minutes remaining in the half, and Eli Manning engineered an 8 play, 85 yard drive that ended with a 3 yard TD pass to Kevin Boss with 13 seconds left in the 2nd quarter. The Giants led 21-16 at halftime, marking only the second time all year the Pats had trailed after 2 quarters.

Less than 6 minutes into the 3rd quarter, Eli found Plaxico Burress for a 19 yard TD pass, and the Giants were up 28-16. Giants Stadium was in a frenzy.

Then the Patriots woke up.

Laurence Maroney scored on a 6 yard run in the 3rd quarter, and then in the final stanza, Moss and Brady hooked up again for 65 yards for the go ahead TD, then Maroney scored again from 5 yards, giving the Pats a 10 point lead. The Giants got another TD pass from Eli to Plax, but the Pats held on for a 38-35 victory, and a perfect REGULAR season.

The Giants gave the Patriots all they could handle, but in the end it just wasn't enough. As the Patriots celebrated their historic win, the Giants walked off the field knowing they could play with anyone in the NFL, and felt they just might get their shot at denying history again.

All it would take to get there was beating Tampa in the heat, going to Dallas and slaying the dragon, and then beating Green Bay in weather Eskimos wouldn't go out in.

No video this week, I really didn't think anyone wanted to watch a video of the Pats winning.