Great Moments in Giants Stadium History: "We stomped YOU OUT!"

Share All sharing options for: Great Moments in Giants Stadium History: "We stomped YOU OUT!" 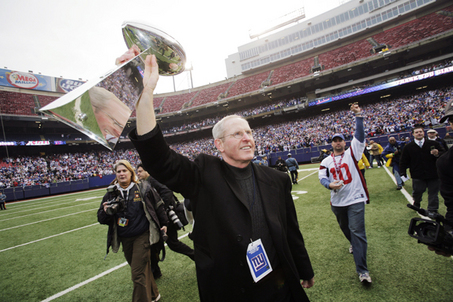 The Giants had shocked the world, and now it was time to celebrate.

The celebrations for the 1986 and 1990 Super Bowl Champions took place at the Meadowlands, and the 2007 team would enjoy the same honor. But first, the Giants would get the franchises first trip through the "Canyon of Heroes" in New York City.

The Giants were feted with a ticker-tape parade through Manhattan, and a ceremony at City Hall. Who can forget Michael Strahan "stomping out" the Patriots on the City Hall stage?

But after all the pomp and circumstance in the Big Apple, it was time to bring the Vince Lombardi home. Home to Giants Stadium, where the Giants hadn't been in over a month, having taken their act across the country, from Tampa to Texas, Texas to The Tundra, and The Tundra to the Tumbleweed. The Giants journey had taken them 28 days and 6609 miles, but it was worth every step to return to Giants Stadium as Super Bowl Champions.

A crowd of over 20,000 packed the stadium, The fans burst into cheers when wide receiver David Tyree was introduced and pressed a football to his head, simulating his astonishing catch in the final minutes of the game.

State Senate President Richard J. Codey took a jab at the Patriots when he referred to the videotaping scandal at Giants Stadium against the Jets during the season. "If the Patriots were here today, they could film all they want", Codey said.

The crowd saved its loudest cheers for Coach Tom Coughlin, who emerged from a tunnel holding aloft the Super Bowl trophy.

"You believed in us and this group of young men believed in themselves," he said. "And that's why we're standing here today."

Here is a video of the celebration from Giants Stadium, courtesy of RidgewoodTV.com