Giants have had some first-round flops

Share All sharing options for: Giants have had some first-round flops 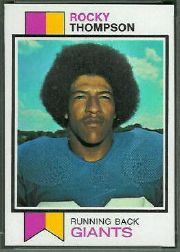 Make a mistake with your first-round selection in the NFL Draft and you can set your franchise back for years.

As we lead up to this April's draft, let's study Giant drafts in the modern era. I will define 'modern' as from 1970 to today. Yes, that takes us through what we refer to as 'The Wilderness Years.' Doing that, though, might help us learn something about the difference between success and failure in the NFL.

Rocky Thompson (1971) -- Drafted 18th overall, Thompson gained a grand total of 302 yards from scrimmage in three awful seasons. A speedster, he did return two kickoffs for touchdowns. You don't draft guys in the first round to be kick returners, though.

Butch Woolfolk (1982) -- Another running back taken 18th overall, and another flop. He lasted three unproductive season in New York, losing his job to Joe Morris. Had stops in both Houston and Detroit after the Giants, and was a miserable failure in both of those places, as well.

George Adams (1985) -- Another first-round running back (19th this time), another flop. Started all of 8 games in four seasons with the Giants.

Jarrod Bunch (1991) -- What is it with the Giants and drafting crummy running backs? After being selected 27th in 1991, Bunch amassed a total of 785 career yards in three NFL seasons.

Derek Brown (1992) -- A tight end from Notre Dame, Brown was a complete washout. He was a horrible receiver who caught just 11 balls for 87 yards in three seasons. Somehow, he lasted four more seasons in the league after the Giants got rid of him.

Cedric Jones (1996) -- The Giants missed out on Simeon Rice that year, and took Jones 5th overall because they felt they had to have a defensive end. Jones never came close to the production expected from a player chosen that early. He had one 7.5-sack season in a non-descript five-year career.

Ron Dayne (2000) -- Again with the running backs! Maybe we should just steer clear of Knowshon Moreno. Dayne won the Heisman Trophy at Wisconsin, and we know had a very ordinary career. He got buried behind Tiki Barber, and ended up as a journeyman who never got an opportunity as a lead back.

William Joseph (2003) -- The Giants drafted Joseph 25th overall when defensive tackles were the rage. He was the 6th one taken in the first round that year (the 10th defensive lineman) and never lived up to it. He was really Jay Alford, and had he been a third-round pick like Alford his production probably would have been OK. But, as first-round picks go 80 tackles and 7 sacks in 5 seasons just doesn't cut it.

Anyone else you think should be here?