As far as I am concerned, besides the Giants, the only other person who can call Giants Stadium home is Bruce Springsteen.

Bruce first played Giants Stadium in 1985, when he did 6 shows in late August, near the end of a tour that had last almost a year and a half. Bruce's popularity was skyrocketing, the "Born in the USA" album (yes I said "album") had spent 7 week in the Billboard Number 1 slot, and yielded an incredible 7 Billboard Top Ten hits. Bruce's videos were all over MTV (when MTV still played videos), and his concerts were selling out worldwide. When Bruce returned to the US for the last leg of this long tour in 1985, he finished by playing in some of the biggest stadiums in North America. Thanks to a late summer rainstorm in NJ, one of the Giants Stadium shows had to be rescheduled for another night, which left a neighbor of mine with an extra ticket, which he sold to me for face value, $21. I repaid him by mowing his lawn three times (I was 15 at the time). I was a budding Bruce fan at the time, still in training, but after that night I was hooked, and I've never looked back. 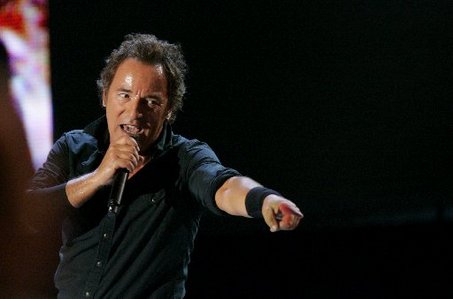 After many years of playing in arenas, Bruce returned to Giants Stadium in 2003, playing an unprecedented 10 shows that summer as part of The Rising tour. Reuters reported that those 10 nights alone resulted in 566,560 tickets being sold and a gross of $38.8 million, a world record for one engagement. The Giants Stadium management reported that ticket buyers to those shows came from all 50 states and all over the world; they had celebrated the event by building a huge boardwalk and amusement park in the parking lot next to the stadium. The Giants Stadium shows had specially numbered and colored T-shirts for each night of the stand.

Bruce returned to Giants Stadium in July of 2008, for three shows as part of the last leg of the Magic tour. He played to sold-out crowds of 55,000 fans a night - many holding up gigantic homemade signs like they were at Wrestlemania. The overall effect made night felt like a gigantic Jersey house party. Taking many requests from fans over the three nights, Bruce played a whopping 55 different songs over the 3 nights.

I am hoping that Bruce will find a way to play one more night at Giants Stadium before they close the place. I think it would be a fitting sendoff to hear Bruce sing "Glory Days" for a final encore at the last concert at Giants Stadium, with Phil Simms, LT, Eli and Strahan on stage with him.

And for suggesting the idea, I'll take 4 tickets down front please.......

Finally, here is a video of Bruce performing my favorite live song. "Tenth Avenue Freeze-out", at Giants Stadium in July of 2008. This song is best listened to at jet-engine like decibels.