Who is the Giants' best 7th-round pick?

Share All sharing options for: Who is the Giants' best 7th-round pick? 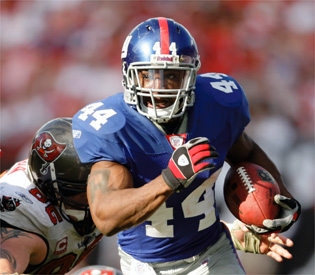 We have reached the seventh and final round in our look back at New York Giants' drafts since 1970. Since the draft used to go beyond seven rounds, I will take a look later on at some of the best players the Giants took later than the seventh.

For now, though, this will be the last actual round we will look at.

One thing is really obvious. With four names on the list, two of those from the 2007 class, it's easy to tell how special that draft, Jerry Reese's first as general manager, was.

Let's look at the four candidates.

Played for 10 seasons with the Giants, and was a starter and very solid player most of that time. Had 18 career interceptions, and helped the Giants win two Super Bowls.

Had a solid seven-year career with the Giants. His best season was 1988, when he caught a team-high 65 passes. Finished his career with 232 catches.

Started all 16 games for the Giants last season, and finished with 66 tackles. Johnson is still developing, and I don't think we know how good he will be yet.

Bradshaw is a playmaker, and has become a bit of a cult figure in his two seasons. Almost all Giants' fans have been clamoring for him to play more, and a segment of fans calling themselves 'Bradshawlics' are still insistent he is a better player than Brandon Jacobs. I'm not buying that argument, not even close. With Derrick Ward gone, though I am very interested to see how well he performs as the No. 2 back. I am confident he will do just fine.

My thoughts: Someday, the answer to this question might be Bradshaw. Or Johnson. I just believe that neither of them has been around long enough to deserve winning this vote. But, that's just my $.02. It will be interesting to see how this vote turns out.