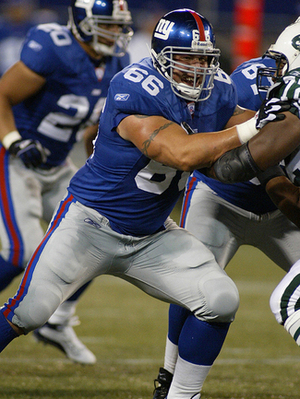 Today we move on to the fifth round in our round-by-round look at New York Giants' drafts since 1970.

Looking through the fifth-round selections, there are only two players who deserve consideration as the best fifth-round pick of the era we have been discussing. Current left tackle David Diehl, and former running back/kick returner extraordinaire Dave Meggett.

Current tight end Kevin Boss was a fifth-round pick in 2007, and may end up being the best of the bunch. He has not done enough yet to be given consideration here, however.

Let's examine the case for Meggett and Diehl.

Meggett is, in my opinion, the best kick returner the Giants have ever had. In six seasons with the Giants he returned six punts and one kickoff for touchdowns. The 5-foot-7, 190-pound Meggett also spent three years with England and one with the Jets. Meggett was also a valuable third-down back, catching 32 or more passes in each of his seasons as a Giant.

Diehl has started at every position on the offensive line with the exception of center during his Giants' career. He is, probably, a Pro Bowl caliber guard but has shown the versatility and willingness to play well at both tackle slots as well.

The fact that Diehl has made a successful transition to the all-important left tackle slot answered the only question left on the Giants' current offensive line, and helped it become a group widely regarded as the best in the league.

To me Diehl is a great example of why you should always look for big, versatile athletic offensive linemen in the middle rounds of the draft. You always need depth, and you never know which one of those diamonds in the rough will become a real stud.

Vote for which player you think is the best fifth-round pick in the poll below.