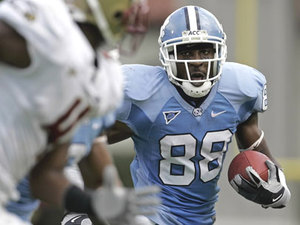 Right now the consensus No. 1 pick for the Giants in the first round of next month's NFL Draft would be North Carolina wide receiver Hakeem Nicks.

Here is a profile of Nicks from SBN's draft site, Mocking The Draft.

Strengths: Arguably the top route runner in this year's class, Nicks is a reliable target with very good hands. Runs crisp routes and has good quickness out of his breaks. For a receiver, Nicks has good strength. Cornerbacks have to be sound tacklers to take him down in the open field. Gives some safeties trouble when he gets a head of steam. Has good awareness of the sideline when he's up in the air. Knows how to really attack a zone. Easily locates the hole and is patient enough to sit in them until the pass arrives.

Weaknesses: Really lacking good speed. May test well due to offseason workouts, but Nicks doesn't play especially fast. A little slow off the blocks. Played in an offese that has several quality targets, which often gave Nicks one-on-one coverage. Has serious ball-control issues after the catch. Nicks need to learn how to tuck the ball high and tight as he'll occasionally get the ball knocked out of his hand.

Final word: Nicks entered the draft, following a stellar junior season in which he had 1,222 yards receiving and 12 touchdowns, both records at North Carolina. After Michael Crabtree, a real argument could be made that Nicks has the best hands in this class. He's also a polished route runner and strong after the catch. So long as teams aren't relying on him as a deep threat, Nicks should excel in the pros.

Hakeem Nicks is an excellent wide receiver prospect despite not being as physically gifted as others. He is solid across the board but lacks the size of a Crabtree or Britt, and the speed of a Maclin or Harvin. He is a better all around receiver that most receivers and his hands and toughness will make him a productive NFL player. He could crack the end of the first round, but shouldn’t last long into the second round.

Personally, considering the Giants' dubious record when drafting wide receivers in recent years, any wide receiver pick will make me nervous. Yet, I do like what I see and read about this guy.