NFP: Price will be high, but Boldin is worth it

Share All sharing options for: NFP: Price will be high, but Boldin is worth it 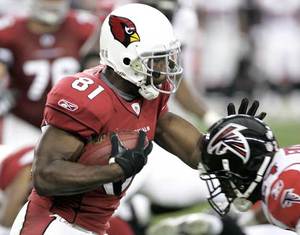 Pro Football Talk stirred up all the 'Arizona is willing to trade Anquan Boldin' rumors again yesterday. I don't have any idea whether there is anything to the report. There is no substantiated source, and no real evidence that the Cards are ready to deal Boldin.

I do know this much, though. If the Cardinals are trying to move Boldin, I want the Giants to go all-out to bring him to New York.

The National Football Post, a publication I am coming to respect more and more, has a great analysis of what Boldin brings to the table. It includes this line:

You can’t get much better than Boldin when it comes to "new weapons" on the offensive side of the football.

Is Boldin worth it?

Of course he is. The other day, someone tried to tell me that Boldin was a product of the Cardinals offensive system.

I walked out of the room so I didn’t lose my temper.

This guy is for real. I played against him during my career, and I can tell you that he’s the last receiver you want to see in the open field with the ball in his hands. Yes, Randy Moss might strike the most fear in NFL players when he lines up before the snap, but once Boldin catches the football, he’s the scariest thing on the field.

He runs like a running back — a great running back — after he catches the ball, but unlike the majority of NFL receivers who dive down after a catch or look for the nearest sideline, Boldin is looking for contact — and extra yardage. He is physical, he is tough, and he can play nasty. Line him up in the slot and make a safety drop down to cover him. Good luck with that. He can be a match-up nightmare for defenses in this league. If he wanted, this guy could be an excellent strong safety in the NFL.

Bottom line: Boldin is worth the money and the draft picks if you’ve got them.

If you have an opportunity to make a play for him, why wouldn’t you pull the trigger and make it happen? I have always been in favor of using your resources in this league to bring in good talent that cost draft picks because rookies are, well, rookies. You can’t count on them for anything, and you never know how a young kid in going to do in the pro game, especially at wide receiver with an NFL playbook in his hands.

Boldin has proved this time and time again. He can play the game, and he plays the position better than most.

He’ll play somewhere next season. If he stays in Arizona, we get to watch that team pile up points and stats again. But if he does go to a new city, he’ll be worth every dollar and every draft pick that your team paid to get him.