Share All sharing options for: Great Moments in Giants Stadium History: The Road to Pasadena Begins 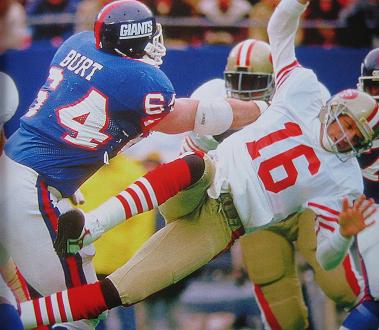 The Giants went into the 1986 playoffs with a record of 14-2, and eager for revenge against the Chicago Bears, the team that eliminated them in 1985 with a 21-0 victory at Soldier Field. The Giants had home field advantage in 1986, and felt the results would be different if the game were to be played at Giants Stadium.

But first up for the Giants in the semifinal (as it was called then) round was the San Francisco 49ers. The Giants were facing the Niners in the playoffs for the 4th time in 6 seasons, and the teams had also played twice in the regular season over that span as well. These were two teams that knew each other very well, but on January 4th, 1987, the Giants might as well have been perfect strangers to the team from the City by the Bay.

The game started with the Giants punting after going 3 and out. The Niners had the ball at midfield, and on 2nd down, Joe Montana found a wide-open Jerry Rice. Rice was sprinting for the end zone when he inexplicably fumbled the ball. After unsuccessfully trying to recover the ball on the run, it skipped into the end zone and was recovered by Giants safety Kenny Hill.

When asked after the game if Rice scoring would have made a difference in the game, Lawrence Taylor remarked, "Yeah, the final score would have been 49-10"

The Giants, were led on offense by halfback Joe Morris, who torched the 49ers' defense for 159 yards in 24 carries, scoring on runs of 45 and 2 yards, and Phil Simms, who threw 4 TD passes on just 9 completions.

Near the end of the 2nd quarter, with the Giants already ahead 21-3, Jim Burt sent Montana sailing into the off-season with a vicious hit, the ball fluttered out of Montana's hands, and was picked off by LT and returned for a touchdown. In all, the Giants defense intercepted Niners QB's 3 times that day. The Giants 49-3 victory was one of the most lopsided victories in NFL post-season history.

"We were shattered by a great team," said 49ers' head coach Bill Walsh.

The Giants wouldn't get their wish, as the Bears were beaten the day before by the Redskins, but at this point, it didn't matter. The Giants were clearly the best team in the NFL, and the first NFC Title game in Giants history would be played at Giants Stadium the following week.

Finally, here is a video of Jim Burt taking out Montana and LT's pick, I love hearing Dick Lynch at the end of this video: