Boley scouting report from 'The Falcoholic'

Share All sharing options for: Boley scouting report from 'The Falcoholic' 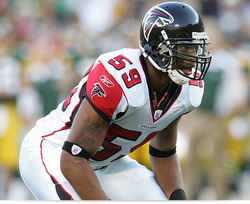 Some fast work from 'Dave the Falconer' over at The Falcoholic. I reached out to him a couple of hours ago for info on Michael Boley, and I already have a report for you. Here is what Dave had to say about the new Giants linebacker.

Michael Boley didn't get the credit he deserved until he didn't deserve it.
Boley played at a Pro Bowl level in 2007 and showed an incredible versatility. He could get to the quarterback when need be (three sacks in 2006 and 2007), but he tackles well and can force a few fumbles. He also is active in the passing game, covering tight ends and running backs well when need be and grabbing a pick or two a year when the opportunity arises. His skillset is incredibly well-rounded.
He fell out of favor last year because the Falcons utilized their linebackers much more against the run. Boley isn't weak against the running game, but it's not what he does best and rookie linebacker Curtis Lofton was much more effective on the ground. Boley's role the past couple of years had been as the defensive centerpiece, and without being called upon to roam on his own terms, he turned in a solid but thoroughly unspectacular year.

In New York, I expect Boley will be called upon to fulfill a complementary role. The best advice I could give to your coaching staff is to put Boley in on passing downs as often as possible and allow him a little leeway to do his own thing. When he's allowed to do a little freelancing, more often than not he'll come up with a game-changing play. Despite last year, I don't believe he's anywhere close to washed up.

Appreciate the help, Dave. To be honest, I'm still not sure what the Giants are getting here. But, as always, In Reese We Trust.