Share All sharing options for: Great Moments in Giants Stadium History: December 13th 1998: Any Given Sunday 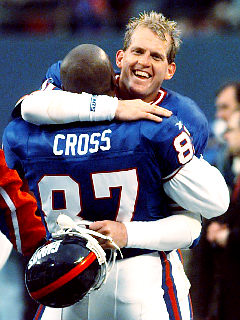 "A spoiler role is not a role that interests me. I don't want to be known as a guy that wants to be a spoiler. I want to be a guy that's a winner. We'll be ready for them.''

Giants linebacker Jessie Armstead, when asked if he was relishing the Giants possible role as spoilers to the Denver Broncos quest for perfection.

In the week leading up to their matchup with the 13-0 Broncos, the Giants kept insisting they were more than a bump in the road for the Broncos date with destiny, although it was hard to make a case otherwise.

The Broncos hadn't lost in almost a year, and, at 13-0, were on cruise control to a second consecutive Super Bowl title and in pursuit of NFL perfection -- a feat no team had accomplished since the 1972 Miami Dolphins. Meanwhile, high expectations for the Giants had been wiped away by just five victories in their first 13 games.

The best that Giants LB Corey Widmer could point to as a reason to believe was ''a weird vibe, a weird feeling.''

Defensive end Chad Bratzke said at the time: ''Right now, they're the best team in the N.F.L. But anybody can be beat on any given day. You have to go into every game believing that you're going to win. People who don't have that attitude don't play in the N.F.L.''

This truly was "Any Given Sunday".

The game went back-and-forth early on, with both teams exchanging field goals, Giants QB Kent Graham continued to work. He found Tiki Barber for a touchdown late in the second quarter and drove the Giants into position for two more Brad Daluiso field goals that netted a 13-9 lead early in the fourth.

The Broncos were on the verge of dodging the upset when Davis' 27-yard touchdown run gave them a 16-13 lead with 4:08 left and then pounced on running back Gary Brown's fumble less than a minute later.

After an improbable defensive stand, the Giants got the ball back with 1:49 remaining. Completions of 15 and 11 yards sandwiched Graham's 23-yard scramble, leaving the Giants at the Denver 37. With four receivers running deep, Graham threw into the end zone for Amani Toomer -- who out leaped a Denver defensive back and wrestled the ball away for a touchdown.

The pass was initially ruled incomplete, but the back judge overruled the call and signaled touchdown -- giving the Giants a 20-16 lead.

Graham, an 8th round draft pick out of Ohio State, serving his 2nd tour of duty with the Giants, played the game of his career that day, going 21 of 33 for 265 yards with 2 TD passes, including the game-winner to Toomer.

The Giants defense played one of its best games of the year, sacking Elway three times, and holding Denver to just 159 yards passing.

"They ended up going to the Super Bowl and we didn't even go to the playoffs," Toomer said. "But it was the highlight of that year."

Two things stand out from this game for me. One, when Gary Brown fumbled late in the game, Bill Romanowski recovered the fumble and taunted the crowd, assuming the game was over. The other thing I'll always remember is when the Giants won, jumping up and down on the couch with my son, who was 6 at the time. Still not sure how we didn't break that couch.

Thanks to GiantsG30, here is a video of Amani Toomer catching the game winner: