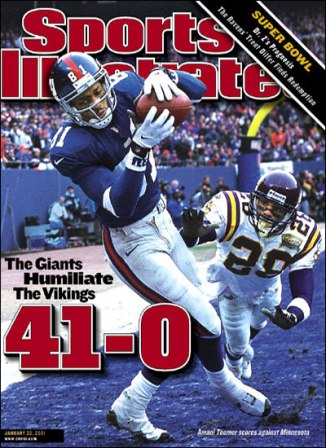 [EDITOR'S NOTE: This is the first installment in a series 'jrs' will be doing to commemorate the final season at Giants Stadium.]

One minute and fifty seven seconds into the 2000 NFC Championship game, Kerry Collins hit Ike Hilliard for a 46-yard touchdown pass to give the Giants a 7-0 lead over the Minnesota Vikings. That was as close as the Vikings would get the rest of the game.

Despite being a 2-point underdog at home, the Giants got off to a fast start and never looked back. By the time it was over, the Giants had thrashed the Vikings 41-0, and earned the 3rd Super Bowl appearance in franchise history.

The Giants relished their role as underdogs, and used it to their advantage.

Head Coach Jim Fassel, who had already delivered the playoff "Guarantee" after a week 12 loss to the Lions, had one more motivational speech for his team on the eve of the title game:

''There's one team in this league that already calls itself America's team,'' Fassel said. ''We've living the American dream. We are the American dream. In this country, if you've got belief and determination, there isn't anything you can't accomplish.''

The Vikings (12-6), who had the National Football League's fifth-best offense this season, not only did not score against the Giants, but they also had just 114 yards, the third-lowest total in a postseason game. With Kerry Collins throwing to seven different receivers for 381 yards and a playoff-record-tying five touchdowns, the Giants had 518 yards of offense -- the most in team playoff history.

At game's end, under a sea of confetti, as he accepted the George S. Halas trophy, Wellington Mara summed up the Giants season by telling the crowd:

''Today, we proved that we're the worst team to ever win the National Football Conference championship. I'm happy to say that in two weeks we're going to try to become the worst team ever to win the Super Bowl.''

Here is a video recap from the game. Remember to check back next Thursday for another great moment.