I'm not happy and I know none of us are. But let's put things in perspective, people.

If you're not a fan of the Colts, then your team isn't going to win 12+ games and make the playoffs every single year. That's the reality of the NFL. I think it's pretty encouraging that we're all this pissed off about a football team that kept its playoff hopes alive for sixteen weeks of the season.

Since 2005, the Giants have made the playoffs every year, won the division twice and won a Super Bowl. It was a pretty nice four-season run. Now it appears that's over and it's time to do more than the minimal tweaking we've seen in the past two offseasons (I don't care how much money Reese spent -- getting players the caliber of Canty, Boley, and Bernard is merely tweaking). There is some talent to build around, there are just some areas that need addressing.

Anyone calling for Coughlin's head is delusional. This, at worst, is an 8-8 football team this year. That means that in TC's six seasons, this team has finished .500 or better in all but one of them, gone to the playoffs in all but two of them, and won a Super Bowl. Say what you want about Bill Sheridan -- his first season has been poor, at best, and the Hindenburg at worst. I know a lot of people aren't too keen on Kevin Gilbride, either. But as for Coughlin, he's not going anywhere. 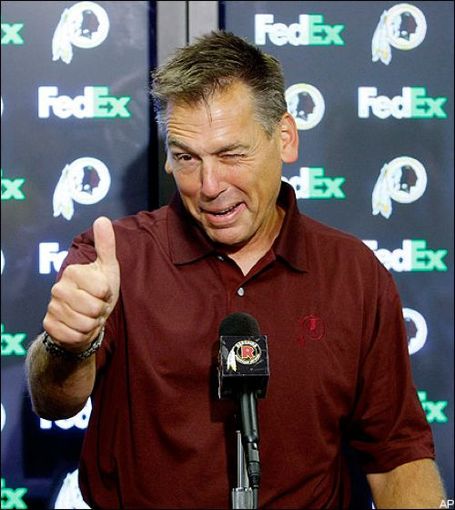 Hey, things could be worse...

The NFL has become a passing league, and unlike half of the teams in the league, the Giants have a quarterback. So those saying that this team is suddenly going to turn into the Knicks (sigh), you're mistaken. As for stopping the pass, that's going to be the major issue they have to address in the offseason.

The most disheartening thing about the blowout loss to the Panthers is not just that the Giants' 2009 playoff hopes went into the toilet, it's the fact that performance is the last impression made by the team at Giants Stadium. Funny how a team that didn't come into existence until the mid-'90s handed the Giants perhaps their two most embarrassing losses in the Stadium's fine history (see: 2005 Wild Card round).

I'm sad it had to end this way, but the world is not over. The Giants will be contenders again, and soon. This group and this front office has won before, there's no reason to think it can't happen again.

Step off the ledge my brothers (and sisters). The defending champion Yankees' pitchers and catchers report in two months. Oh and um, I hear Citi Field is really pretty (I didn't want to forget about you Mets' fans).