The Giants are broken ... Now, how can they be fixed?

Share All sharing options for: The Giants are broken ... Now, how can they be fixed?

I am starting with this premise. The biggest problem on this football team -- without any doubt in my mind -- is the underwhelming defense. This team was built to dominate defensively while the offense found its way as the young group of wide receivers grew into its responsibilities.

There have been weeks when the offense has not played well, which he realistically had to expect entering the season. Or when various aspects of the special teams have not played well. The one constant, though, has been that against good teams the defense has been completely overmatched.

When we weren't talking about Plaxico Burress during the off-season, we were talking about the devastating defense we thought General Manager Jerry Reese had assembled. So far this season, the only things the defense is devastating is the Giants' chance to be a good football team.

In the last three weeks the Giants have given up 112 points (37.3 per game) and been riddled by too many huge plays for me to even think about. Forget being a dominant defense. Bill Sheridan's unit is not even close to being a competent one right now.

So, what can be done to improve the situation? I am going to break this down into four categories -- defensive line, linebackers, secondary and philosophy. 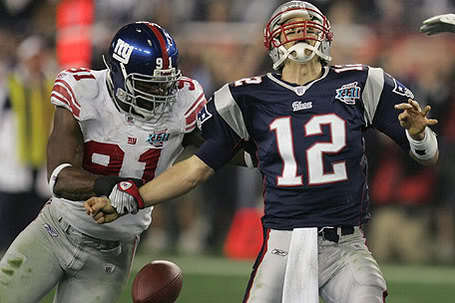 Remember back in the pre-season when we were wondering how defensive coordinator Bill Sheridan was going to find roster space -- and snaps -- for all the talented defensive linemen the Giants had collected?

Well, now the question is can anyone on that front four make a play?

The Giants are tied for seventh in the league with 18 sacks, but it is obvious that the front four cannot consistently pressure quarterbacks by itself -- which was the plan with this group. Osi is not the dominant force of yesteryear. Justin Tuck must still be nursing the Week 2 shoulder injury. Mathias Kiwanuka has been mostly a non-factor in recent weeks. The defensive tackles are non-existent in the pass rush.

The run defense has been horrible. Philadelphia ran for 180 yards, including 66 and 41-yard touchdown runs. Arizona, which is a bad running team, consistently got solid runs. New Orleans did what it wanted on the ground as well as in the air. All the way back to the Dallas game the run defense was a problem. In that game the Giants gave up runs of 56, 35 and 20 yards.

Way too often, running backs are hitting the second and third level of the Giants defense without being touched.

Fred Robbins and Barry Cofield are not holding up inside. Neither is Rocky Bernard, brought in from Seattle specifically to help the run defense. Jay Alford is gone for the year.

The solution? Inside I think all the Giants can hope for is that Chris Canty can make some plays if he ever comes back healthy. That is no guarantee, though, even if the Giants are paying him $42 million. He has never been a defensive tackle, and he has missed so much time there is no way of knowing how effective he can be. In all honesty, I have never been a big Cofield fan. As for Robbins and Bernard, I am wondering if both of these mammoth guys have just gotten old.

Outside, I think the only change the Giants can make is to start getting second-round pick Clint Sintim on the line in passing situations. Sintim and Osi at the ends, with Tuck and Kiwi at the tackles is the best pass-rush group the Giants can put on the field.

Other than that, all we can hope for is that Tuck and Umenyiora get healthier, and start making the plays they are being counted on to make. 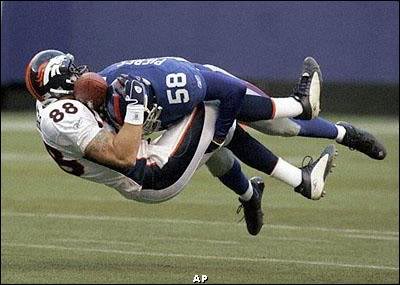 Ah, the linebackers. Ugh! There isn't much nice to say here. Without the injured Michael Boley this is an un-athletic, un-inspiring, un-imposing group.

Danny Clark? Nice guy, great character, Tom Coughlin loves him and DC will do great things off the field once his playing days are done. On the field, though, Clark should not be a starting linebacker in the NFL. The guy is old, slow and hardly ever makes a play. Pretty much, he is just out there.

Chase Blackburn? Again, great character guy. Great special teams player. Smart, can play multiple positions and is a good tackler. But, slow, not and doesn't get off his blocks very well. Not a play-making, starting caliber linebacker.

Antonio Pierce? We knew he is smart. We know he is the 'quarterback' of the defense. We also know he is slow in pass coverage, not very imposing in the middle of the defense and has been getting abused by offenses for the past two seasons. Who do you think teams are running at over and over and over when they gash the Giants up the middle? Sorry, but AP's best football is clearly behind him.

The solution? Clearly, some personnel changes are needed here. And this is an area of the defense where the Giants DO have some options. Those begin, again, with Sintim. I know the second-round pick from Virginia has clearly missed a lot of time on the practice field due to his leg injury earlier this season. He showed in the pre-season that he is an athlete, and a playmaker. It might be time to let Sintim learn on the field, replacing Clark. Sintim will make some mistakes, but he will also make some plays against the run simply with his athleticism. Against the pass? Put him at defensive end let him do what he does best -- get after quarterbacks.

On the other side, the Giants obviously miss Boley. In the couple of games he played before going down with a knee injury, he showed athleticism and cover skills the Giants have not had in an outside linebacker for a while. He will, of course, help when he returns. Until then? Sorry, Chase, but let's get Bryan Kehl on the field and see if he can help. Again, he is more athletic and maybe he can make a difference. Maybe he can't, but it's worth a shot to find out.

In the middle? The Giants are not moving Pierce out of there, as much as some of us might like them to. Blackburn is not the answer long-term in the middle, either. If the season spirals out of control (and Lord knows I am not wishing for that) I would like to see Jonathan Goff get a chance in the middle. He was impressive in pre-season and I want to know what he can do.

By the way, Clark, Blackburn and Gerris Wilkinson are free agents after this season. This group is headed for an off-season makeover.

We have been over the issues with this group so many times I won't belabor them. The Giants miss Kenny Phillips so much I hate to even think about it. They miss Aaron Ross because at least he would provide them with some options. Have you noticed how often the Giants are playing 'nickel' with Michael Johnson, 'Bad, Bad C.C. Brown' and 'Just as Bad Aaron Rouse' on the field together? That's three safeties on the field in obvious passing situations -- none of whom can cover. A recipe for disaster.

There are no easy solutions here, though getting Ross back in some semblance of playing condition is probably the best the Giants can hope for. At least then in some of those passing situations they can get Brown off the field.

We would all love to see Brown get his pink slip. Yesterday. There is, truthfully, no help out there right now, however. If Reese could have done better than Rouse when KP went down he would have. But, teams don't jettison players mid-season without a good reason.

Mostly, we just have to hope that Brown and Rouse learn from their mistakes, and get on the same page with the rest of the secondary. Oh, and that somebody back there remembers tackling is part of the job.

New defensive coordinator Bill Sheridan is under fire from every direction. Blitz more, Bill!. Don't blitz so much, Bill! How come your team can't play the run, Bill? Your guys can't cover, Bill! You can't carry Steve Spagnuolo's jock strap, Bill! Hey, Bill, we would have re-hired Tim Lewis or Johnnie Lynn if we wanted to watch this crap!

I have said it before -- I won't kill Sheridan over how much he blitzes or doesn't blitz. This team was built to pressure with four. It's not happening. They aren't getting home with the blitz, either. Because they just don't have the athletes.

That, really, is the crux of it. Right now the Giants simply don't have the athletes to be a dominant defense.

That said, it would be nice if Sheridan would remind his defensive backs that making a tackle once in a while would be nice.

I truly believe that better defense would solve a lot of the other problems the Giants are having. Inconsistent offense (which we expected entering the season), erratic special teams (which seems like a Giants trademark), the occasional incomprehensible Kevin Gilbride play call (yes, they do happen) would all be much less of an issue if the Giants could simply stop somebody once in a while.

We will see if Coughlin, Sheridan and Co. can figure out a way to make that happen. If they can't, the last eight games will be torture to watch.