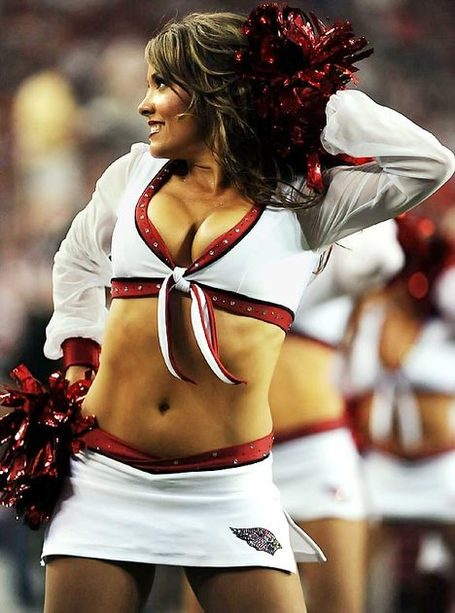 No chat with the Cardinals blogger yet. But, of course, an Arizona cheerleader.

Richard Seymour and the Oakland Raiders certainly had a great day last Sunday. Not only did they beat the Philadelphia Eagles, but they thoroughly enjoyed the pasting our New York Giants took at the hands of the New Orleans Saints.

Remember, Antonio Pierce's "felt like a scrimmage" comment about the Giants game against the Raiders? Seymour sure did.

"They got what they deserved this week," Seymour said Wednesday. "I’m not sure how many points the Saints scored on them, but if I’m not mistaken, it was half a hundred points. So, I think he got enough to chew on himself with that."

Here are a few highlights from Tom Coughlin's meeting with the media Wednesday.

On the struggles of the secondary to play the ball Sunday.

"It is always coachable. You challenge them to be in the right place, see the ball better. Have a sense for the ball and where the ball is and exactly where the defender is, what the defender is going to do. You can’t just play his eyes; you have to play his hands and the way in which he prepares himself when the ball comes."

By the way, TC hinted that 'Bad, Bad C.C. Brown' might lose some snaps to Aaron Rouse this week. Hooray!

"We are very much in need of all three phases to play well together and I’m talking about on defense, the front, the backers and the back end. But we need to pressure. We need to be there for the quarterback."

"There was good reason to be frustrated on Sunday. Not just him. I wouldn’t make a big deal out of that. To try to get more responsibility on the quarterback you try to make sure – and he has done a good job of that. He has worked hard with those guys. And I think that for whatever reason the communication wasn’t as solid as it should have been. That is what frustrated him, not the play. It was just the fact that he couldn’t get the message across to him."

About that pass rush

Giants defensive end Dave Tollefson says he and his cohorts on the defensive line need to get back to basics.

"Pass rushing is really elementary but a lot of people – pass rushers included – tend to complicate it," Tollefson said. "You have to do what you’re good at, and remember that the quarterback is the prize.

"We need to focus on beating the guy who’s blocking us," he said. "A lot of guys sometimes forget that and are too busy looking to see where the quarterback is and how many steps they need to take to get to him. But if you’re not focusing on your technique to beat the guy in front of you, what happens? You’re going to get blocked and you’re not going to get any pressure, let alone sacks."

I don't care how they do it. Justin Tuck, Osi Umenyiora and Co. need to get back to making life miserable for quarterbacks.

Bon Jovi to open Giants-Jets stadium
Bon Jovi? You're kidding me? He's OK, but this gig should belong to Bruce Springsteen. After all, Giants Stadium has been his home base for decades now.