Prospecting: An inside look at Kenny Britt

Share All sharing options for: Prospecting: An inside look at Kenny Britt

We have spent considerable time already this off season discussing how our New York Giants should replace Plaxico Burress. I am sure will spend a lot more time on this topic before training camp.

Many of you have suggested drafting Kenny Britt of Rutgers to fill the void. One of the great things about the SBN Network is the number of college bloggers we have.

Luckily for us, SBN recently launched a Rutgers blog, Protect R Turf. I went to editor Anshey Bhatia for some input on Britt, and here is what he had to say. 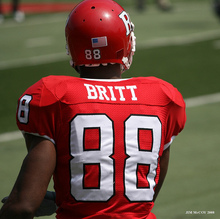 He's a Junior out of Bayonne, NJ (hard working, blue collar community from what I know of it), and is a favorite of head coach Greg Schiano.

hile he doesn't have blazing speed, he's fast "enough", has great hands and great size. Struggled a little bit early on in the season w/ some big time drops, but really came around the second half of the year as Rutgers rang off 7 straight wins to close out the season.

I would project him as a solid #2 receiver, great at making the short to mid range catches and good for an occasional long ball (with defenses being so much better in the NFL).

Solid route runner, found a way to get open consistently for Mike Teel, accumulating 1,371 and 7 TD's on 87 receptions - not too shabby, especially on a team with 2 other legit wide outs.

He's very physical - his physicality will help him tremendously (and already has). He uses his size to his advantage in order to get open and get in the mind of opposing CBs.

A pure wide receiver in every sense of the word. Doubt he'll play on special teams but who knows, maybe the coaches will try him out there a little bit to see what he can do.

Will probably need a season of learning to be able to make big time contributions to a team, but I think he'll get some playing time in 2009 if he's on a team that's not littered with WRs.

In terms of the Giants, my personal feeling on it is if they can get him in the second round, they should get him for sure. The Giants need a big time #1 receiver after Plax self-destructed, and I'm not sure if Britt can fit the bill in the short term (but maybe in the long term). I think they already have a receiver like that in Steve Smith (a solid #2, even if he lacks ideal size), but I might be selling Britt a little bit short.

He's got the size, hands, and pretty good speed. Plus, he's only 20. Some players get way better in the NFL, some wilt away under the pressure. Britt is a hard working, coaches favorite type of kid, so I would think he'll get better, a lot better. He can do it (make the leap from #2 to #1 receiver), but I wouldn't be shocked either way. One thing is for sure: I don't see this kid being a bust at all - he's been great and spectacular at times over his 3 years at Rutgers, even if he was playing against air he's been a great player (and sometimes against Big East D's it felt like he was playing against air). He will, barring injury, be at least a productive player in the NFL.

Thanks for input, Anshey. What do you guys think?

I will continue to go 'prospecting' occasionally as the April draft gets closer. Hopefully, some of the other college bloggers will be as cooperative and insightful as Anshey. By the way, be sure to stop over at Protect R Turf if you are a Rutgers fan.