Dave from Asheville: A Retrospective

Share All sharing options for: Dave from Asheville: A Retrospective 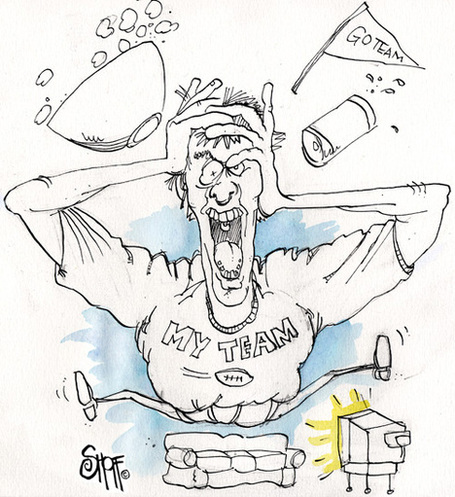 Yesterday was one of the most animated Thursday meetings in Big Blue View history. The walls of BBV headquarters were still shaking over the comments made by "Dave from Asheville" to the "Mosley Mailbag" on ESPN 2 regarding cutting Eli Manning. I haven't seen people this upset since "The Kanavis McGhee Incident" which occurred when BBV was still a monthly newsletter. We don't talk about that anymore.

Things did get pretty hairy around the building though. Ed tossed over the table with our company sponsored lunch on it; we were cleaning up baloney sandwiches all afternoon. We all just found it hard to believe that anyone could suggest cutting Eli Manning.

After further investigation, it turns out this was far from "Dave from Asheville's" first submission to the "Mosley Mailbag", and thanks to some begging, and a brand new $10 bill, Big Blue View was able to acquire some of the other letters Dave has submitted. For your reading pleasure, we bring you the following correspondence from "Dave in Asheville" to the "Mosley Mailbag":

You know, it's a dangerous world out there for a star athlete, I think guys like Plaxico Burress should carry a gun everywhere they go."

Who the hell is Steve Spagnuolo? What is Coughlin thinking hiring this guy? He's never been a coordinator, he's not the right man for the job!"

Love the Shockey pick, he's a team player, quiet guy, he'll fit in real well and not make trouble for the organization. I love this kid's durability too, he'll be there every Sunday!"

I even found a few "snail mail" letters from Dave:

The Giants are thin on the Offensive Line, and the Eagles have a strong defense, especially that Herman Edwards guy. If they have the lead with time running out this Sunday, they should consider handing the ball to Csonka rather than Pisarcik taking a knee, the Eagles will be gunning for him and we can't have our franchise QB getting hurt!"

How can the NEW YORK Giants move to New Jersey? What's wrong with Shea, or the Yale Bowl? Mark my words: the Giants will never win a Championship while they reside in NJ"

"$500 for a professional football team in NY? STOP

The Giants? Couldn't they come up with something original? STOP

I'm sure as time goes on, Dave will write more letters, and we'll be sure to bring them to you.