'Kudos & Wet Willies,' it's over too soon edition

Share All sharing options for: 'Kudos & Wet Willies,' it's over too soon edition 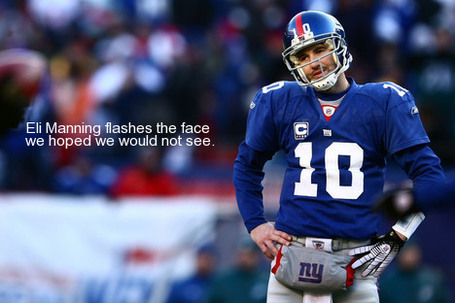 The season has ended much too soon, sooner than it was supposed to. Perhaps we were spoiled by last season's unexpected Super Bowl title, and most definitely by the 11-1 start this team got off to.

As the season unfolded it felt like this team was on the cusp of something special, something historic. This proud, original NFL franchise has never won back-to-back titles, and we thought this would be the year. We thought the Giants of the past two seasons might go down as the most special New York Giants team of all time.

Alas, the Philadelphia Eagles had other ideas. The Eagles came to the Meadowlands and shattered the dream Sunday, ending the Giants' dreams with a well-earned 23-11 victory.

I won't succumb to being bitter today, though. An opportunity has been lost, but there is hardly reason to throw around words like disgrace, to start calling for the firing of coaches or to start demanding wholesale changes on either side of the football. I know losing to the Eagles makes it hurt more, but take time to look at the big picture.

No matter what team you root for, you wish your team could win every single game and be the champion every single season. It simply doesn't happen that way, however.

However you rank them, the Giants were unquestionably among the best teams in the NFL this season. They will be among the best again next season, and quite possibly for many seasons to come.

As 'queler' said in his Fanpost "that was one of the greatest 365 days of Giants football I can remember."

Indeed it was. Be thankful for it.

Be thankful that you still have a deep, talented roster that has quality young players at almost every position.

Be thankful that, despite his struggles Sunday, you have a quarterback in Eli Manning who isn't done winning big games.

Be thankful that you have a terrific head coach in Tom Coughlin who has taken his team to the playoffs four consecutive years, and isn't done winning yet.

Be thankful that you have a great general manager in Jerry Reese who can identify the weak spots on this roster and has proven he knows how to fill them. Oh, and be thankful he has some extra draft picks to play with this April.

The season did not turn out the way we wanted, or hoped, or maybe even expected. But I do not think the final chapter has been written for the core group that leads this Giants' football team.

I think there are plenty of good memories still to be made by this team. I am thankful for that.

Now, on to the traditional 'Kudos & Wet Willies.'

There's plenty of crummy stuff to talk about. Let's start with some of the good things, though.

Now we get to the ugly stuff. I think these are pretty predictable if you watched the game, but we have to go through them.

That's all I can do for now. Don't jump off the bridge, Giants' fans. This is a team that won a Super Bowl, followed it with a division title, has lots of young talent, a great coach and GM, and extra draft picks thanks to the Jeremy Shockey trade. The future remains bright.