The best year in Giants' history?

Share All sharing options for: The best year in Giants' history?

The flame is about to go out on 2008. Before it does I have a question for you, the esteemed members of Big Blue View Nation.

Have we just witnessed the greatest calendar year in the history of one of the NFL's original franchises?

I have been a Giants' fan since I was a little kid, or for roughly 40 years. I will admit my memories of the 1986 and 1990 championship teams have dimmed a little, but I can't recall a better year of watching Giants' football during my lifetime.

I would love to hear what some of you old-time fans (George, 'Pot,' '57') have to say about this. I think, though, that what we have seen for the past 12 months is as good as it gets when you root for an NFL team.

The year, of course, began with an unexpected Super Bowl title. It is ending with an NFC East title and a No. 1 seed in the upcoming playoffs.

The winning, of course, if a big part of what has made this the most special year I can ever remember as a Giants' fan. It is also, however, the way in which it has all been accomplished. 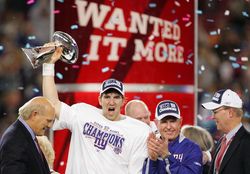 Yes, there are memories galore that I will take from 2008 when it comes to rooting for the Giants. I just don't know how it gets any better than this.

Of course, a second straight Super Bowl title wouldn't be a bad way to start 2009, either.